Halloween is all about the cute and spooky treats, and these Halloween Cake Pops will be the star of your party spread! Moist chocolate cake, wrapped in chocolate shells that look like ghosts, mummies, eyeballs and pumpkins!

Halloween treats are some of the most fun and creative to make, and these cake pops are no exception! They do take a little time to decorate, but they’re a really fun way to spend an afternoon with a Halloween film on the tv. The cake itself is super moist, as you mix crumbled chocolate cake with vanilla buttercream, and the decorations deliciously sweet! They’d also make a great gift to bring to a Halloween party!

How to make halloween cake pops

There are quite a few steps to make these cake pops, but most of these are down to the decoration which is the FUN part! You don’t need to stress about it, and actually the weirder the cake pops look the more ‘halloweeny’ in my opinion! So let’s get going!

As I said above, I’d recommend using a box cake mix for the cake pop balls as it just makes your life a lot easier. I’d also recommend making the cake the night before you want to make the cake pops. As you’re crumbling the cake up, it’ll help if the cake is a little firmer so it doesn’t turn to mush.

So, on the day of your cake pop making, firstly crumble the cake into a large bowl. You want it to look like breadcrumbs. Then make up a quick buttercream frosting (you could also buy this pre-made, but personally I’m not a fan of them! Box cake mixes are the only thing I condone!) and mix this into the crumbled cake. The mixture should be just moist enough, that you can squeeze a small handful and it will stick together.

Then you can make your balls. I made 20 balls, about 30g each or 2 tablespoons. You could make yours smaller if you want, but I wouldn’t go any larger than that. Once you have your balls, place them on a baking tray and pop them into the freezer. You want them to be nicely chilled when you dip them into the candy melts, so they don’t just fall apart.

Once your balls have chilled in the freezer for 20 minutes, I like to take them out and re-roll between your hands to smooth the ball shape. This can be a little tricky to get completely perfect, but as we will be decorating the cake pops it doesn’t matter too much for this recipe. Then pop them back in the freezer for another 5 minutes.

In that time, you want to melt your candy melts in preparation. Ideally you’d melt them in a heat-proof jug, but if you don’t have a microwave you can heat them over a bain-marie in a heat-proof bowl. If you are melting in a bowl however, I would then pour the mixture into a jug. A jug is a better vessel for dipping, as the melted candy melts are in a a smaller concentrated area.

Before you start dipping, you need to have your cake pop sticks ready, and something to stick them in for the cake pops to dry. I used a leftover cardboard box and made small holes in one side, so I could push the sticks in and leave to dry. They don’t take long until they’re set, but you do want to make sure you don’t touch them while they’re still wet.

To decorate the cake pops you’ll need royal icing, fondant icing and edible eyes – I got these from the supermarket, but you can also get them on Amazon. I did want to say though; I will take you through how to decorate the pops how I’ve done them, BUT you can totally decorate these how you want! Or do more of each style if you prefer a particular pop, there’s no rules here!

First, make up a batch of royal icing without any colourings, then get started;

Can you make cake pops in advance?

The cake pops themselves last really well, and the cake stays moist. However, the decorations like edible eyes and fondant don’t last as well. I’d advise making them the day of, or day before, of serving, for them to look their best.

Can I use any cake mix in my cake pops?

Yes absolutely! The cake flavour can be anything you want, for Halloween especially a red velvet might work well!

I can’t get candy melts, can I just use white chocolate?

I’m so happy with how these turned out, as not only are they delicious but they look SO cute too! Perfect for a Halloween party, or an afternoon baking session infront of a spooky film. You can be so creative with the decoration and change up the cake flavour if you want too! So versatile, but so so tasty! 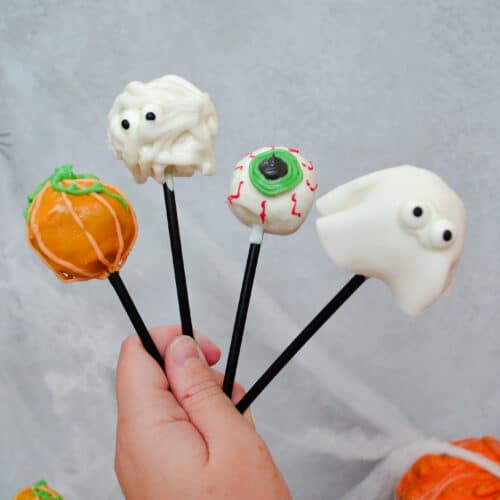