Spooky spiderweb smores cupcakes. I’m pretty sure this is the most halloween-ish (can we make that a word?) bake I’ve ever created. I’m not really one for Halloween if I’m honest. I hate scary films, fancy dress stresses me out and I’ve only ever trick or treated once, maybe twice in my life. I guess it’s just not very British! That and my childhood home was egged and a stink bomb was chucked through our letterbox when I was little, so that definitely put me off.

But, when it comes to baking I’m always interested in baking something new, and in the interest of sticking to the seasonal theme I thought I’d have a go. Cobwebs always seem to play a big part in halloween decoration, that and pumpkins. Buttttt I’m not a huge fan of the flavour of pumpkin, unless its in a soup. Then I guess it just reminds me of butternut squash. Baked pumpkin flavour though, is just not for me. I’ll admit I don’t even like a pumpkin spice latte! Am I even a blogger?!

So with pumpkins out the window I knew I wanted to incorporate cobwebs into the bake instead. I’d seen a video on Facebook a few weeks ago where a baker covered an entire cake in stringy marshmallow and I knew straight away thats what I wanted to do. And there was born my spooky spiderweb smores cupcakes. Creating the webbing was SO MESSY. Honestly, I was getting stuck to everything!! So make sure all the cupcakes are laid out in front of you, so you don’t have any issues like me. It was quite satisfying though, a bit like the feeling of that PVA glue you’d use in school. The kind which everyone would purposefully get on their hands just so they could pull it off again. It begins to harden pretty quickly, so you do need to work relatively fast. The best technique I found was to rub a little between your hands and then stretch out a few times to get the optimum stringiness before placing over the cupcake. The messier the better really though, as they’re not meant to look too neat.

So if you’ve read my title correctly you’re probably wondering where a certain aspect comes in to the spooky spiderweb smores cupcakes! The cupcake sponge itself has four digestives in to give that classic graham cracker taste. This is then secretly filled with chocolate ganache, homemade marshmallow is piped on top and then dunked in melted chocolate. Smores is such a classic American treat, but the topping tasted exactly like a tunnocks teacake to me. Or the very best homemade teacake actually!

I almost didn’t want to cover them in the marshmallow webbing, as the chocolate looked like cute little hats on the piped marshmallow. But, I had to give them their Halloween treatment! The soft sponge, surprise ganache centre, oozing marshmallow and crack as you bite into the chocolate hat gives the most wonderful combination of textures. And they do taste quite aptly autumnal, as if you can imagine sitting around a camp fire with them. Perhaps even telling ghost stories!

If you do give them a go, bear in mind they taste best on the day of baking. If you store them in an air-tight container the marshmallow webbing will go slightly sticky due to the condensation. They are still perfectly fine to eat, but won’t look quite as good. 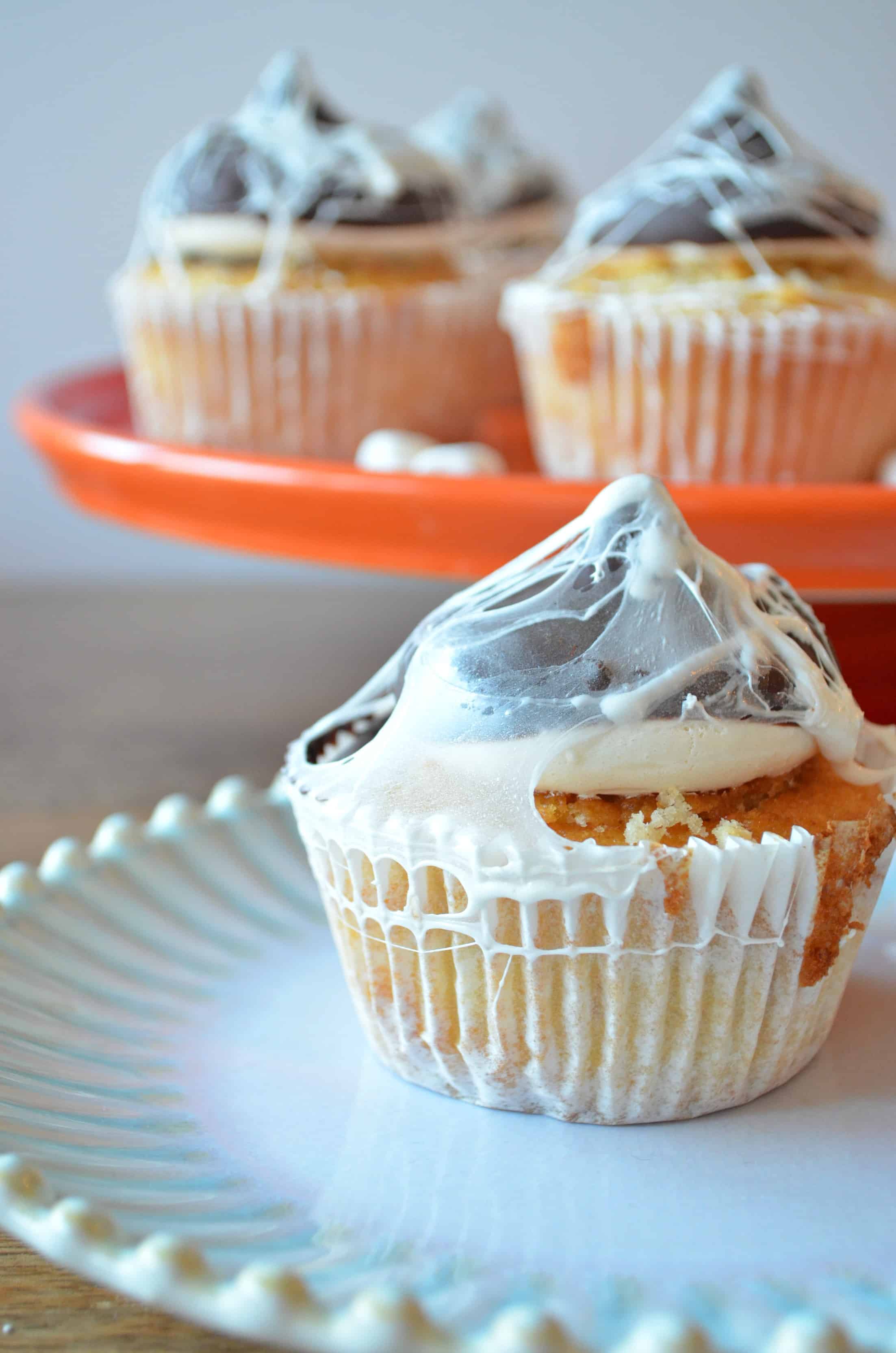