If you’re more spoopy than spooky at Halloween, then this vegan easy no-bake pumpkin cheesecake is perfect for you! A spiced ginger crust, creamy pumpkin filling and adorable piped pumpkin decorations. It’s the sweetest scary treat there is!

When it comes to vegan cheesecakes, we’ve come a long long way. I remember trying one at a food festival back in 2013, and honestly it wasn’t great. This pumpkin cheesecake however, is SO good. Honestly I don’t think you’d know it was vegan, and it’s super easy. That’s something I’m always keen to ensure in all my vegan bakes, that there isn’t a huge list of hard to come by ingredients and its not a 9 step process with overnight soaking. No shade at all to vegan bakes that are like this, but I think the more complicated (and more impressive!) vegan bakes should be left to the bakers who specialise in it. More and more I’m trying to include vegan bakes here on the blog, but I’m not professing to be an expert in the field at alll. So easy vegan bakes are where I’m at right now, and when they’re this delicious I’m sure you’ll be converted too!

As I said above, this is a really simple recipe. and if you’ve made one of my no-bake cheesecakes on the blog you’ll be pretty familiar with the steps. There are a few slight changes, but nothing tricky I promise! Now lets get going, as your cheesecake will need to chill in the fridge for 4 hours at least – so let’s get baking!

Making the ginger base

Once you have your biscuit/butter mixture combined, it should look a little like wet sand, you can then tip it into your prepared tin. If you have a springform tin (i.e. a tin with a latch on the side) then use this, and it’s much easier to remove your cheesecake once you’re ready to serve. But if you don’t have one, use a loose-bottomed tin instead. For both tins, make sure you line the base with baking paper before you add the biscuit mix, as again it’ll help you to remove your cheesecake.

So back to the biscuit base, once you’ve tipped it in the tin, you need to press it down evenly and firmly. Using a cup measure or spoon can help here, to give you an even flat base. Then it needs to be chilled for 20 minutes in the fridge, to set.

For the cheesecake filling, ideally you’ll use an electric hand-whisk. You’ll get a much creamier and well combined cheesecake if so, but of course whisking by hand will still work well. You’ll also want to keep your cream in the fridge until you are ready to use it, as it will whip much better when cold.

So, the cream should be whipped first in a large bowl until it’s thickened and has reached soft peaks. Then in a separate large bowl, whip the cream cheese and icing sugar together until well combined. Then pour in your whipped cream, and whip again on a high speed. It will really thicken at this point, and look really creamy and luscious. The final step, is to add in the canned pumpkin.

Then you can pour the whole mixture on top of your chilled ginger base. Tap the whole tin a few times on your work surface, just to make sure you remove any air pockets and to help flatten it out. As we’re decorating the top, I also like to level it out with a spatular or spoon.

Then it needs to chill in the fridge – the words you never want to see at the end of a recipe! But honestly, cutting this too soon will result in a overflowing mess! So into the fridge for a minimum of 4 hours, but ideally you’d leave it overnight.

The final step in this vegan cheesecake, is to add the super cute pumpkin decorations! It’s a really simple butter icing – vegan butter beat until smooth and lightened, with icing sugar then added in. This makes a really small amount, as obviously we don’t need much! Once the icing is ready, you need to separate out a small amount into another bowl. This smaller amount will be your pumpkin ‘stalk’, so green food colouring should be added. Then orange food colouring can be added to the larger amount, for your pumpkins.

Can you make vegan no-bake cheesecake in advance?

Yes absolutely! And actually as the cheesecake needs to set for a minimum of 4 hours, making it the night before serving is actually ideal.

How do I make sure my vegan cheesecake sets?

This cheesecake will be a softer-set than a dairy filled cheesecake, but so long as you whip the cream separately first and chill it in the fridge for the required time it will be set enough to cut.

I don’t have a piping bag, how can I decorate the cheesecake?

If you have a food or freezer bag, you can use this as a makeshift piping bag by just snipping off one corner! So simple!

This vegan no-bake pumpkin cheesecake is so light, so creamy and perfectly spiced. Ginger and pumpkin go so well together, and its the perfect dessert for Autumn & Halloween! And best of all it really is so easy to put together, and looks SO impressive and adorable when you serve! 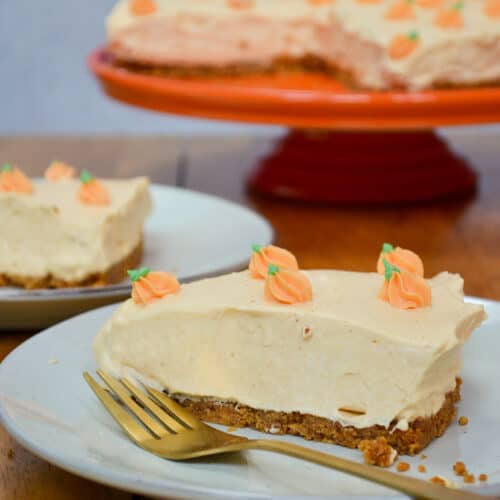 Cheesecake can be made a day in advance of serving, kept in the fridge and covered with clingfilm.  Once served, cheesecake will keep well in the fridge for 3-4 days if tightly covered.
Keyword cheesecake, ginger, No-bake, pumpkin, vegan
Filed Under: Cheesecake, Desserts, Halloween, No-Bake, Vegan
Apple Crumb Cake
Halloween Cake Pops