As we welcome in September, the comforting bakes are coming out in full force. And for me, apples and cinnamon are the perfect choice. This apple crumb cake is packed full of moist apple chunks, a cinnamon sugar layer and a crisp crumb on top. It’s simple to make, lasts really well and delicious served as a dessert with cream or custard!

How to make apple crumb cake

This is a fairly simple recipe, but there are a few separate elements to create before baking.

First step is to make the cinnamon crumb, so that once your batter is ready, you can top it and get straight in the oven. As a general rule. once you have mixed a cake batter you don’t want it to be sitting around too long, as the chemical reaction from the baking powder has already begun. If the batter is left too long outside the oven, you may end up with a dense flat cake!

So first, the crumb. Like making a streusel or a crumble, this is a mixture of cold butter, brown sugar, flour and ground cinnamon! With everything in a bowl, the butter should be rubbed in. This means to literally rub the mixture between your fingers and thumbs to break down the butter and incorporate it with the dry ingredients. You’ll be left with a mixture that resembles breadcrumbs. I like to try and keep the breadcrumbs irregular in size, just to make the top of the cake look more interesting! This can then be set aside, while you make the batter.

The batter for the cake is a fairly standard sponge, so nothing too tricky here. You do need to make sure you’re using room temperature butter however, so if you didn’t read through the recipe already and separate your butter. Your butter might still be cold from the making the crumb above. Here are a few quick tricks to warm it up!

Once your butter is at room temperature, beat this together with both the caster and brown sugars until light and fluffy. Then the eggs should be added one a time, mixing well between each addition. The flour and baking powder can then be added and mixed until just combined. Finally, you need to stir in your chopped apples.

The apples need to be peeled, cored and cut into eighths. You could cut them smaller if you prefer, but I like them quite chunky. I prefer to chop these once the batter is made, so they can be added straight in, to prevent any browning. But, if you feel like the peeling/coring/chopping process will take you a little while, feel free to do this first and just coat the apple chunks in a little lemon juice to prevent browning.

Finally, the cake can be assembled! Firstly, half of the cake batter needs to be spread evenly into your lined tin. Because the apple chunks are quite big this will take a minute or so, but just keep smoothing with a offset spatula or just the back of a spoon.

Then in a small bowl, mix together the caster sugar and ground cinnamon and sprinkle this evenly across your cake batter. The final half of the cake batter can then be spread carefully on top. And finally, the cinnamon crumb that you prepared earlier can be sprinkled across the top. And voila! You are ready to bake.

This cake does have quite a long bake time, as its fairly deep and also full of moisture! But its totally worth it, not just for the glorious apple, cinnamon and sugar smells that will be emanating from your oven!!

Can I freeze apple crumb cake?

Yes! Double wrap the cake tightly in clingfilm, and defrost at room temperature when ready to serve. The crumb topping won’t stay crisp, but you could place it back into the oven for 20 minutes to warm through and this will give a little of the crispness back.

Keep the cake either wrapped tightly in cling film or in air-tight tupperware, and it will last for 4-5 days.

How to tell when apple crumb cake is done?

I really hope you love this apple crumb cake as much as I do! Its moist, flavourful, warming, comforting…I could go on! It also lasts so well, making it the perfect weekend bake to see you into the week! And it comes together so easily! I’d love to hear your thoughts in the comments below! 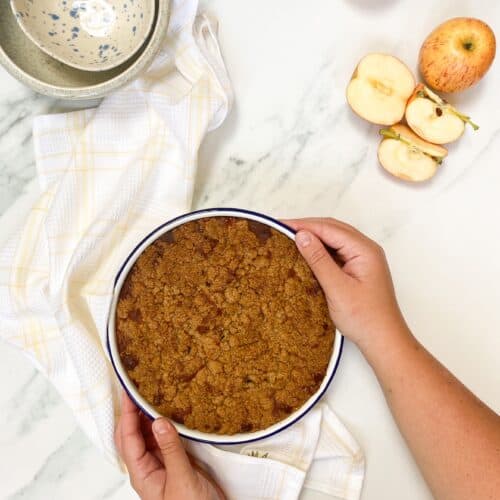 Apple crumb cake can be kept in an air-tight container for 4-5 days. Apple crumb cake can be frozen, by double wrapping in cling film for up to 3 months. Defrost cake at room temperature, and warm in the oven for 20 minutes at 180C/160C Fan/Gas Mark 4 if desired, and to re-crisp the topping.
Keyword apple, cinnamon, crumb
Filed Under: Cakes, Desserts
Vegan Carrot Cake
Blackberry Jam Cake