Happy New Year guys!! 2020 was probably the strangest year of most our lives, and to be honest 2021 hasn’t started amazingly…butttt I’m trying to stay positive here. So yay a new year!

Now a lot of people kick off a new year with a diet or health kick. And that’s not what I’m doing here, but I have decided to take part in Veganuary on the blog. So each recipe for the next three weeks will be vegan friendly! I do already have a few vegan recipes on the blog; chocolate & raspberry cupcakes! Sausage rolls! Tea & toast truffles! Andd peanut butter energy balls! But I’ve really enjoyed the challenge of figuring out four new recipes this year.

Vegan baking is definitely a whole new ball game for me. Because I don’t make a huge amount of vegan food, finding substitutes for dairy products has meant a lot of trial and error for me. I’m also keen to try and keep the ingredients list accessible. I don’t want to make recipes that require going to specialist shops or buying ingredients you’ll only use once – especially when we’re still in a pandemic! So with that in mind, lets get on to the brownies!!

How to make vegan rye brownies:

My main mission when making these brownies, was to make them taste no different to a dairy-filled brownie. I’ve eaten vegan brownies in the past and have often found them either really dry and crumbly, or so fudgy they seem underdone. I wanted to find the perfect balance between the two, and I genuinely think I have with these!

I’m super happy with how they turned out and I really hope you’ll like them too!

So lets get to the method:

These brownies are really easy to make and don’t take too long either, win win!

And you’re done! All thats left is to bake the brownies for -35 minutes – until a skewer inserted comes out almost clean. You want to see some brownie batter still on the skewer, as that means your brownies will keep moist and fudgy!

Then you MUST leave the brownies to cool completely in their tin. I knowww, I know. Its so hard not to just dive in and eat them straightaway, but I promise it’ll be a sticky mess. Just wait and you’ll reap the benefits!

The real star of these brownies is the rye flour. I LOVE using rye flour in bakes. It adds such a gorgeous depth of flavour, and helps to keep the brownie moist!

I love how these vegan rye brownies turned out, and I really hope you do too! Are you joining in with Veganuary?? 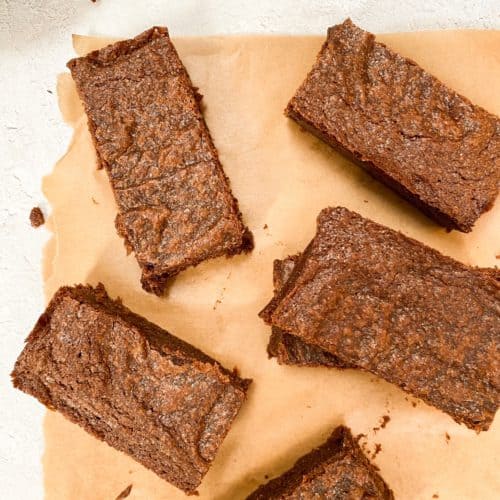