These vegan chocolate and raspberry cupcakes pretty much became the bane of my life a few weeks ago, as it took me SO long to perfect the recipe. Which though frustrating at the time, does make me happier to share the final product considering its been tested so many times.

A couple of years back I wasn’t excited by the vegan baking world and definitely lived under the assumption that vegan baking wasn’t as good as ‘the real thing’. But I’m happy to say that I was wrong. Vegan baking can be amazing and in some cases better than regular dairy baked goods. Nowadays I just think of vegan baking as a different form rather than the poor cousin.

If you’re not convinced, I really recommend giving Crosstown Doughnuts vegan range a try because they’re super innovative with their flavours and you honestly wouldn’t know the difference. I personally recommend the maple bacon 😉 The veganisation of chocolate & raspberry cupcakes: (Is veganisation a word? Or have I just invented something? Either way, this is how I turned my cupcakes vegan)

Firstly I spent a lot of time playing around with vegan butter and aquafaba (chickpea brine that can be used as an egg replacement – its great for meringue!) but eventually I settled on sunflower oil as the butter replacement. And bicarbonate of soda combined with vinegar for the egg. The reaction of bicarb and vinegar gives you the rise you need for light fluffy vegan cupcakes.

Then the buttercream. You’d think this would be simple right? Just use vegan butter? Wellll, I originally was trying to create a vegan swiss meringue buttercream. That failed on me so bad that I decided to bank that and try again another time. All in all, the recipe for these vegan cupcakes is pretty simple and bar the cooking/reducing of the raspberry puree its actually pretty speedy too! The recipe only makes 6 cupcakes as they’re best served same day; so save the recipe for a day when you’ve got some friends round! 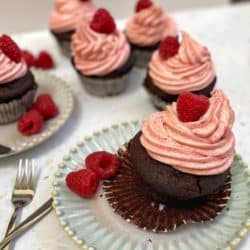