When I first tried the Gregg’s vegan sausage roll early last year, I remember thinking they’d accidentally given me the real deal instead as it tasted exactly the same. If anything it tasted better – which is no surprise really as most shop-bought sausage rolls use pretty low-quality meat. Now my vegan ‘sausage’ rolls aren’t emulating a real sausage, so there’s no Quorn here and I’m being pretty loose with the term ‘sausage’ roll. I thought it’d be more interesting (and delicious!) to fill it with vegetables instead.

The biggest conundrum I had when creating these rolls was how to make the puff-pastry, renowned for using full-fat butter. This was something that had intrigued me about Gregg’s version too – how did they make it taste exactly the same?! Well. It turns out that Jus-Rol puff pastry is actually vegan – who knew! Obviously I wanted to create my own pastry though, so the research didn’t stop there. Another revelation was that Storks Baking Block (not to be confused with their baking spread) is also vegan – as its made with vegetable oils (which also makes it lower in saturated fat!). I also found a few other brands that were classed as vegan baking spreads – so there should be something available in most supermarkets.

So whats the secret to perfect vegan rolls? So though the baking block appeared similar to butter, it needs a little extra TLC to create delicious pastry;

So we’ve nailed the pastry, whats going on inside? Anything with butternut squash in I’m allll over. So I had to include it in this; roasted with a sprinkle of cinnamon its just delicious. I also added pine nuts, sage, parsley, lemon and caramelised onions. Now with that combination I’d usually add feta into the mix – but of course this is a vegan sausage roll! I still wanted that tangy salty flavour, so I added some black olives in to the mix.

The combination is really delicious, and the pastry works really well (though this wasn’t my first attempt. Note to self, don’t try to create vegan pastry on a 31C day…). I won’t blame you if you fancy just using a packet of Jus-Rol, but please make the filling! 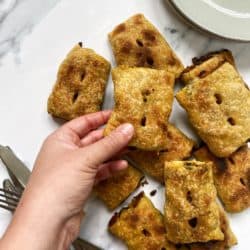