Vegan brioche dough made with aquafaba! These vegan sticky buns are deliciously decadent, packed full of pear, walnut and caramel!

The second instalment of my veganuary series is here with a bang! These vegan sticky buns are so good, I honestly think you would never tell they’re vegan.

The buttery brioche dough is light and soft. The caramel sauce is luscious and soaks gloriously into the buns. The chunks of pear and walnut give just the right amount of crunch, and the cinnamon sugar filling pairs beautifully.

Basically I could wax lyrical about these all day. But I’ll get to the making instead..!

Now, if you made my Pecan and Maple Sticky Brioche Buns (and if not, why not?!?) you will be familiar with the process here. I essentially veganised that recipe and added a new flavour. Don’t get me wrong I LOVE maple & pecan, but the world seems to be saturated with maple & pecan sticky buns and I think we can all use a new combination!

How do you make vegan brioche?

So first up, lets discuss veganising brioche. Considering its well known for its buttery and eggy content, this was definitely the first challenge! However, we are lucky to be surrounded by so many vegan substitutes nowadays that makes things alotttt easier. (I really do have to tip my hat to the vegan pioneers who figured out aquafaba though…like seriously!? Who would’ve thought!!)

Vegan butter I find works just aswell as dairy butter, so this was an easy like for like replacement.

Then it came to the eggs. Eggs have a few roles in brioche;

To add fat – from the egg yolks
To add moisture – as eggs have a higher water content than butter
Finally, to colour – the proteins in eggs reacting with sugar in the dough, help the brioche to achieve that beautiful golden brown colour

Now as we’re turning this brioche dough into sticky buns, colouring isn’t all too important. But, aquafaba (the liquid from a can of chickpeas) can provide the moisture that we need! It doesn’t have anywhere near the same fat content as eggs, but as the dough has such a high content of butter, the aquafaba can still stand in as a replacement.

In this recipe I used 45ml aquafaba per 1 large egg.

Okay, so now we have all our vegan substitutes, making these sticky buns is actually really fun! But you do need to work methodically, so I’ve broken it down into stages:

One final tip I’ll leave you with is to definitely place a large baking sheet underneath your baking dish. My caramel bubbled up a little too excitedly and dripped down the sides of the dish and onto the bottom of my oven, which was superrrr fun to clean as I’m sure you can imagine!! So, cover yourself just in case and put an extra tray in!

Now I did extensive research on this, for the good of you my dear reader…! But seriously these buns are best fresh from the oven. After that they hold up well for 2-3 days, and I just pop them in the microwave for 45seconds to warm through and freshen up!

I really hope you like these buns, and it shows you that vegan baking can be delicious and decadent just like dairy baking! 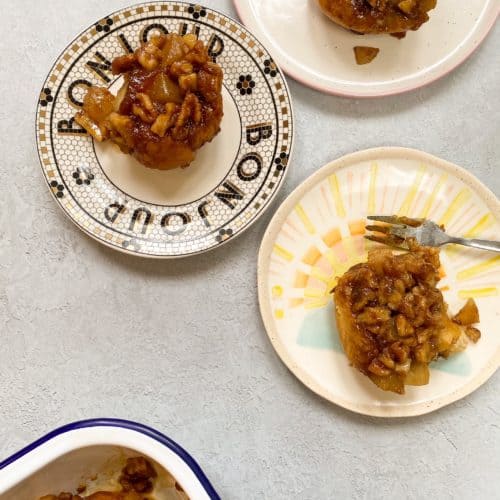