These toffee apple macarons are the perfect treat for Autumn! Crisp chewy shells, sweet & salty caramel buttercream and spiced apple compote. So delicious and so fancy!!

I absolutely love macaron’s. But oh boy are they a finicky beast to get right. You’ll find so many macaron recipes online; some the French method, some the Italian. Telling you to stir the mixture 40 times clockwise, some telling you to leave the shells out to rest for 1 hour, 2 hours.. Some even telling you to age your egg whites first! There’s so much information out there it can be hard to know where to begin. But I really think this recipe works so well, and has given me the best and most consistent results in all my testing. You need a little bit of patience, and a few pieces of equipment but they are so delicious that its so worth it!

These toffee apple macarons in particular, are SO good. They’re the perfect taste of Autumn in my eyes. The crisp and chewy shell. Salted caramel American buttercream thats light and fluffy. Spiced apple compote, which is warming and sweet. It’s the colder seasons, packaged up in a tiny delicate dessert.

How to make toffee apple macarons

I use the Italian method for my macarons, so that means pouring a hot sugar syrup into whipped egg whites to create an Italian meringue. This is then mixed with a paste of icing sugar, almonds and more egg white, before baking straight away. I find the Italian method makes for a much more stable meringue, which translates into more consistent macarons. You don’t have to worry quite so much about deflating the meringue in the mixing stage, and with this particular recipe you don’t need to let the shells ‘set’ before baking, so its much quicker too!

The first step in making an Italian meringue, is to make sure your bowl is absolutely grease free. Any tiny spot of grease will hinder your meringue, so be sure! You don’t want to waste your time or ingredients! Then weigh out your egg whites and add to the bowl. Ideally you really want to use a stand mixer here, as you’ll need to have the egg whites whipping, at the same time as the sugar syrup is bubbling away. If you only have an electric hand-whisk, make sure you have all your ingredients ready in advance and be prepared to multi-task. But carefully please, as the sugar syrup will be very hot.

So once you have your egg whites ready in a bowl, and your caster sugar and water in a small pan, you can begin. The pan should be placed over a high heat, for the sugar to dissolve into the water whilst simmering away. You’ll need to use a thermometer to check the temperature of the syrup (I use a digital thermometer at its more accurate), and once it gets to 110C/230F you can begin whipping your egg whites. You want the egg whites to be at soft peaks, once your syrup reaches 120C/248F, so make sure to keep an eye on both.

Once the syrup is at 120C/248F, take it off the heat straight away and pour it down the side of the bowl whilst the whisk is still going. You want to make sure the syrup runs down the side of the bowl, so it cools a little before hitting the egg whites. That’s also why you want to keep the whites moving, so that the syrup doesn’t cook the whites. I find it best to turn the mixer down to a medium speed whilst you’re doing this, to avoid any of the hot syrup being flicked onto you! Once all the syrup has been added you can turn the mixer back up to the top speed, and keep whisking until you have a glossy white meringue, thats lukewarm to touch.

How to make the paste

The paste is made up of ground almonds, icing sugar, egg whites and your choice of food colouring. I find it easiest to mix this all up in a large bowl, as the mixture is really stiff you need room to work! However, before you get anything in the bowl you first need to blitz and sieve your ground almonds and icing sugar.

The finer your mixture is, the smoother your macaron shells will be. If you leave larger lumps of ground almond, the shells will have a rough texture and they’ll taste a little grainy. So firstly, I like to blitz both together in a food processor and then sieve the mixture twice. Yes twice. The finer the mixture, the more professional looking in my opinion!

Then you can add the sieved mixture to your bowl, and mix in the egg whites. Then the food colouring. I used Rainbow Dust ProGel Leaf Green, but you can use whichever green you prefer, or any colour if you don’t like green! Though I do personally prefer to keep the macaron colour fitting the flavour!

Now you may be thinking the bright green colour above doesn’t match the light green of the baked meringues, and you’d be right! You need to make sure the paste is a much darker colour than you want, because as you add the meringue it will lighten it. If you start with too light a coloured paste, your macaron shells will end up so pale they look white.

So once both your meringue and paste is ready, you are ready to begin the macaronage process. This is where you need to be quite careful as you don’t want deflate all the air in the meringue, but equally you do want to combine it thoroughly. It’s a delicate balancing act, that I do in three stages (pictures above L-R);

The more you make macarons the more you will get a feel for how gently to fold, and when the mixture is ready. As I said at the start, macarons are a finicky beast and you will improve with each batch!

The final step is to pipe and bake the macarons, which is my cue to give a disclaimer about oven temperatures. They’re all different! Do yourself a favour and get yourself an oven thermometer, and also cut yourself some slack. Pretty much every time I’ve baked macarons I’ve had a few in the batch that have cracked in the oven, or left a hollow shell. But I don’t beat myself up for it, because my oven is a domestic oven. Even professionals using fancy ovens have a few cracked ones here and there.

Can you freeze macaron shells?

Yes! Macaron shells freeze really well! Keep them in an air-tight container and use within one month. I actually like to fill them when they are straight out of the freezer as they’re easier to handle!

My macaron shells are hollow! What am I doing wrong?

This could be for a number of reasons, but most likely they weren’t in the oven long enough. Use the time in the recipe below as a guide, you know your oven best after all! Do bakes usually take a few minutes longer? If so, add a few minutes onto the baking time.

My macaron’s didn’t have any feet! What am I doing wrong?

There could be a few reasons, but likely its due to over-mixing at the macaronage stage! Make sure to be very gentle when adding the meringue, and once its ready get it into a piping bag straight away. Don’t be tempted to keep stirring!

So there we have it, my toffee apple macarons! I’ve focused heavily on the shells in this post and not the filling, because the filling is so simple in comparison. A simple American buttercream with salted caramel stirred in, and a quick spiced apple compote made in one saucepan. The combination of flavours with the sweet shells, is SO good. And makes you think of cosy Autumn nights in, by the fire with a hot drink. Just the best! 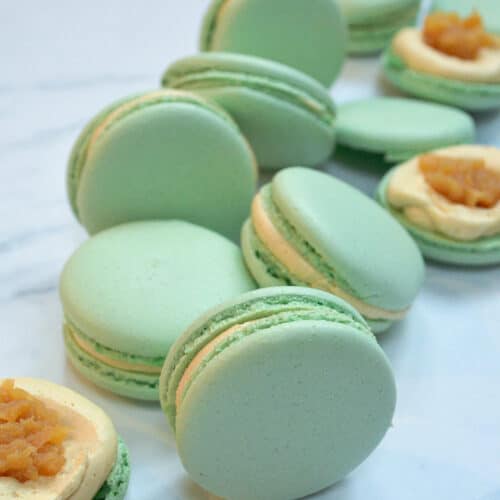