Macarons are one of my favourite French treats. So delicate, but SO versatile flavour-wise. You can create so many different and wonderful creations; though you might be surprised to find out its generally only the fillings that change! The only time you might change the flavour of the shell is if you’re using pistachios instead of ground almonds perhaps.

Making macarons is definitely a finicky business, so keeping to the same shell recipe definitely makes sense in my eyes! You can obviously change the food colouring though, which keeps the macarons looking interesting and in keeping with the flavour of filling. There are various methods of making macarons, and while the method I’m sharing today works great for me. It might not actually be the best method for yourself. Eagle eyed readers might notice I already have a Macaron recipe on the blog, and a raspberry one at that! I posted this in 2015 and back then I was using the French method. Nowadays I prefer the Italian as I find it gives me much more consistent results and its not as much faff!

Many things can affect your macarons – the humidity or rain that day…or even the altitude where you live! That’s why I’m not going to promise that my method below will give you perfect results. Give a few recipes a try and figure out what works best for you – but definitely include mine in that test 😉

For the Italian method we need to heat the sugar syrup before adding it to whipped egg whites. This gives us a really stable meringue to work with, and I think really helps to create a smooth shell. Adding the meringue to the paste (ground almonds, icing sugar & egg whites) is where theres the most room for error. You need to add it in three stages, with the first being fairly vigorous to avoid any lumps. Probably more vigorous than you realise, as the paste will be very thick and stiff at this point.

The second addition of meringue however needs to be very gentle! Make sure you are getting to the bottom of the bowl to incorporate it all, but keep the motion very slow and delicate. The final addition has to be super super super gentle. You don’t want to ruin all your hard work at this stage, so just take your time.

Now with this method I don’t find you need any ‘resting’ time. This is where people rest their piped shells on the baking tray for anywhere from 30 minutes to a few hours, to form a skin. On the contrary I want these baked as soon as possible. So pipe your first tray and get them in the oven straight away. Then once that’s nearly baked, pipe the next tray ready to swap. For the fillings, the lemon buttercream is super simple. Just basic butter and icing sugar, but with the addition of lemon curd and some milk to loosen. I also used store-bought jam, though of course if you’re feeling super fancy you could use homemade!

As I said before, macarons are tricky and a method that works for one person might not work for another. But I’ve always had really good results with this, so I really hope it works for some of you too! 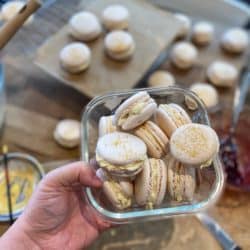 Macarons can be kept in the fridge or frozen at this stage, but are best served at room temperature.
Keyword ground almonds, lemon buttercream, macarons, raspberry jam, swiss meringue
Filed Under: Macarons
Raspberry Macarons with Chocolate Ganache
Toffee Apple Macarons