Crisp flaky pastry, moist ground almonds, spiced tender pear and a sprinkling of icing sugar. These vegan pear and almond filo tarts are simple and so delicious! Especially with a scoop of ice cream!

Dessert at home doesn’t always have to be fancy or complicated, but these vegan pear and almond filo tarts are fancy, but so simple! The flakiness and crispness of filo always makes it look spectacular in my opinion, especially with a dusting of icing sugar and scoop of ice cream on top. The pear slices are coated in cinnamon and honey before baking, which will make your kitchen smell glorious!! This dessert is as delicious as it is simple, making it perfect for a family dinner or romantic meal!

How to make vegan pear and almond filo tarts

These tarts are best eaten warm fresh from the oven, so you want to make them just before you’re ready to eat or before the main course. Baking them only when you’re ready to eat. The filo needs to be crisp and flaky, and if you leave them to sit out after baking, the moisture from the pears can cause them to soften (even with a ground almond barrier!). The tarts are so easy to assemble you won’t be worried, and I’ve got lots of tips and photos below to help!

The first step in preparing the tart filling is to slice your pears lengthways, keeping them quite thin. We’re not poaching the pears first, so keep them thin to ensure they cook evenly and are tender. Do make sure you remove any seeds though! Place all the slices into a bowl, add the ground cinnamon and runny honey and mix! You want to make sure the pear slices are evenly covered, so that each tart is equally delicious.

If you wanted to make more than four tarts (or less than!), you can easily scale up/down the recipe. Each tart uses two filo sheets, so you would just use as many filo sheets as tarts you want to make. For the filling, it roughly works out as one pear per two tarts – so for example, to make 6 tarts I would use; 3 pears, 3tsp ground cinnamon and 1.5tbsp honey (plus 105g ground almonds).

The final step in filling preparation is to weigh out your ground almonds. I find it easiest to have this weighed in advance, as you will need to split this evenly between the four tarts when assembling.

When working with filo you need to work fairly quickly, as the filo can dry out and crack easily. So make sure you have your filo sheets, cinnamony pear slices, ground almonds and melted vegan baking block ready. I find vegan baking block begins to solidify quicker than dairy butter does, so if it’s becoming unworkable, just melt it again gently.

So step by step;

So simple but so effective! The tarts can then be baked for 25-27 minutes until they’re super crisp and golden brown. The combination of crisp pastry and tender sweet pear is just divine! And with a sprinkling of icing sugar and generous scoop of ice cream? Sublime!

Can I make vegan filo tarts in advance?

Sorry, but no! I would only make them an hour or two in advance of serving. So make them before you have your main course, and then pop them in the oven while you’re still eating. You want to eat these when they’re warm and crisp!

Can I swap the pear for another fruit?

Yes, you could swap the pear for apple if you prefer – they have a similar texture and would still be a delicious combination with the almond, cinnamon and honey.

Can you store vegan filo tarts after baking?

Technically you can keep them in an air-tight container for 1-2 days after baking, popping them into the oven to refresh before eating. But I personally think they taste best fresh.

I’m so happy with how these little tarts turned out. I love an easy bake, especially when its a post-dinner dessert! And being vegan and super delicious too, its a win win! The pears are so tender and perfectly sweet & spicy from the honey cinnamon marinade. They pair so well with the moist ground almonds and crisp flaky pastry, sprinkled in sweet icing sugar and of course a big dollop of ice cream! 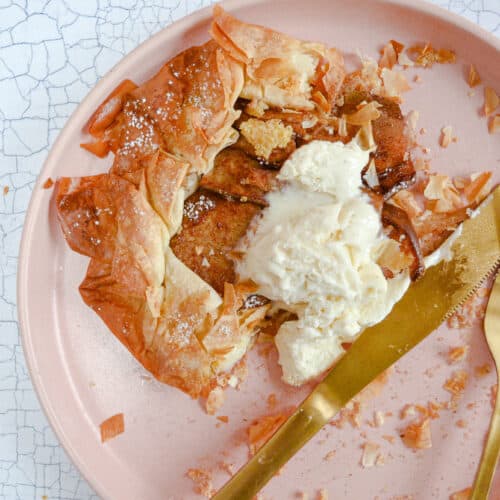