Florentines are the perfect fancy Christmassy snack or even make a great gift! And these vegan florentines will be a hit with everyone!

Florentines have always seemed really fancy to me. An ‘adult’ cookie. I think maybe it was because of the dark chocolate or the mixture of nuts, but I never really ate them growing up. And now I’m mourning for all the lost years when I could have been eating florentines!! They’re packed full of caramelly nuts & dried fruit, they’re crisp and chewy and of course spread with delicious dark chocolate. And with two small changes these become vegan florentines!

How to make vegan florentines

The recipe is superrr simple, and they bake so quickly! Its a really easy recipe to scale up too, if you wanted to make a big batch to give out as gifts! They’re a perfect little Christmas gift.

The first step you need to do, is to prepare your nuts and fruit. Chop the pistachios & pecans roughly and the glace cherries. Then mix them all in a bowl with the mixed peel and flaked almonds and set aside. Then you can begin with the dough.

The florentine dough is actually made in a saucepan, by first heating the plant butter, brown sugar and golden syrup together until the butter has melted. Keep this on a medium heat; you don’t want to boil the mixture. Then you can take it off the heat and mix in the flour, and then the prepared nuts/fruit. And that’s it! It’s seriously so simple.

You should be able to make 18 florentines from the dough, and they will need room to spread in the oven, so you’ll need three baking trays. If you don’t have three trays, or can’t place three trays into the oven at the same time, get the dough spooned onto baking paper in preparation so you can transfer the paper onto trays when you’re ready to bake. The dough will start to harden a little in the saucepan if you leave it in there too long, so it’s easiest to have it spooned out ready.

Then you can bake! They only need about 8-10 minutes in the oven, and they can then be left to cool completely.

And thats it! They should be left for the chocolate to set completely, but you can totally dig into them before and get abit sticky!

Do I have to use dark chocolate?

No! I think the bitter dark chocolate works well with the sweet sugary cookie, but if you prefer milk or white chocolate then its easily swapped out.

How long can you keep vegan florentines?

Kept in an air-tight container you can keep florentines for up to one month! Thats what makes them such a perfect gift, and a great bake to make at the start of December before the chaotic nature of the festive season takes over!

Can I freeze vegan florentines?

No, these won’t hold up well as they’re so thin and made from a liquidy batter. But as the florentines keep so well, it shouldn’t be a problem!

Sometimes a simple quick bake is all you want, and these vegan florentines 100% fit the bill! They’re caramelly, chewy, crisp, packed full of delicious nuts and fruit and bitter dark chocolate! All in a perfectly sized cookie, that makes a great Christmas gift too! And they’re vegan!! So you can keep everyone happy! 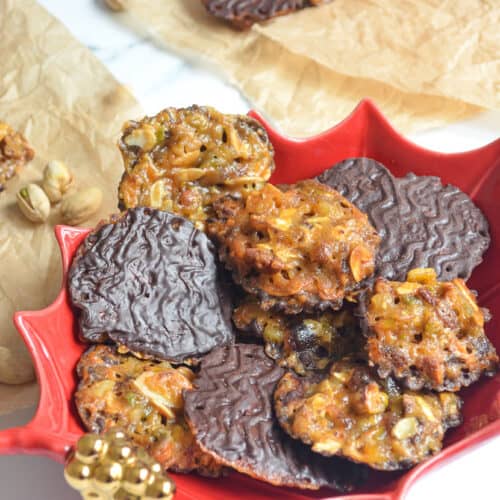