So kicking off the second instalment in my Edible Christmas Gift series is peppermint marshmallows! The classic flavour and a sweet that both kids and adults love! However, I do have one confession.

I actually hate marshmallows…! Which may leave you wondering why on earth I’ve decided to dedicate a whole post/recipe to them!?

I’ve made marshmallows many times before, and I just really enjoy making them! The process is fun, I like how versatile they are to different flavours and they’re a relatively quick treat to make. I also pretty much only make them at Christmas time when I am gifting them, so me not liking them isn’t really an issue! I do of course enlist my boyfriend as taste-tester to make sure they taste good though!!

How do you make marshmallows?

So lets get down to the nitty gritty here, and first start with the ingredients list, which is actually pretty small!

So lets go through the recipe. Making marshmallows isn’t particularly tricky, but like with most sugar syrup based bakes, you do need to follow a few steps exactly and keep a keen eye on temperature!

So first step, is to get everything ready. Your Mise en Place – which is a French term chef’s use for ‘everything in its place’. Get your egg whites in the bowl of a stand mixer (or you can use an electric hand whisk). Get your gelatin sheets ready next to a bowl of cold water. And add your sugar, glucose and water to a small pan.

Firstly, get the egg whites whisking. As its a small amount you may have the same issue as me, that my stand mixer could only just touch the whites which meant it took quiteeeee a while to whip. If you have that issue, give it a quick whip by hand to speed up the process!

Once your egg whites are at soft peaks, place your gelatin in the cold water to bloom and place your pan over a medium-high heat. Stir the mixture until the sugar has dissolved and then let it boil until it reaches 127C on a food thermometer. Your egg whites should still be whisking all the time.

Once the sugar syrup has reached the right temperature, take off the heat and drain the gelatin leaves. Squeeze them to get any excess water out, add to the sugar syrup pan and stir to dissolve. It WILL bubble up at this point, so you need to be very careful and also very quick!

You need to pour this gelatin sugar mixture into your whipping egg whites (which should be almost at stiff peaks by now) while its still super hot. I find it best to turn the mixer down to a medium-slow speed, pour the gelatin sugar mixture in a steady stream (you want the mixture to pour directly into the eggs, not down the side of the bowl as it will cool too much). Then crank up the speed and let the mixture whip until its doubled in size, looks glossy and feels much cooler on the outside of the bowl.

Then we’re onto final steps. Add in your chosen flavourings and food colouring, and whip again until combined. Then quickly pour into a prepared baking tin (with a mix of icing sugar/cornflour sifted in) and level out. It will start to set as you do this, so you need to be quick. Then sift over more of the icing sugar/cornflour mixture, and leave to set.

And that is it! It’ll set in around 1-1.5 hours, and then you can cut into little squares and enjoy! Or place into little presentation bags and gift to friends and family!

Why do you need to coat in icing sugar and cornflour?

A vital step when creating marshmallows is to properly prepare your baking tin. You need to line a tin with a layer of clingfilm, and then dust over with a mixture of icing sugar and cornflour. You’ll need to dust the top of the marshmallow mixture with this too, and all sides once you’ve cut your squares.

The icing sugar acts as a coating on the marshmallows, stopping them from being as sticky. And the cornflour stops the icing sugar from dissolving. Have you ever noticed if you dust a Victoria sponge with icing sugar, after a few hours it starts to dissolve? Mix in a little cornflour and it won’t budge! You also can’t taste it, so your cakes will be delicious anddd pretty!

Marshmallows are definitely a bake that I think a lot of people are scared of making. But I hope I’ve helped demystify them a little!

To me peppermint is the perrrrfect flavour at Christmas time. Great on their own, but IMAGINE them melting into a hot chocolate! I’d love to know if you’re planning to create them for your Christmas presents this year! 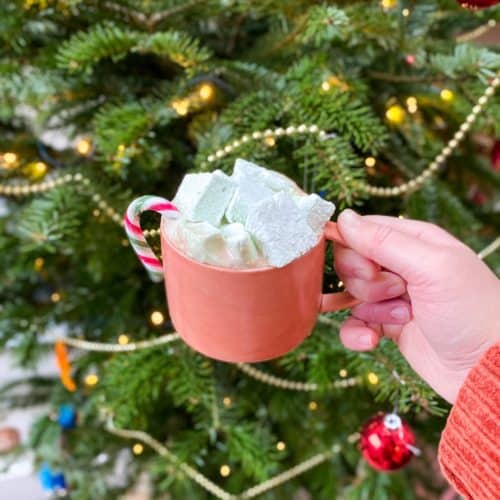