Enjoy a taste of Autumn with these delicious honey apple cupcakes! A honey sponge filled with a spiced apple compote, topped with creamy honey buttercream and a dried apple slice!

With leaves turning into gorgeous autumnal colours and the colder nights drawing in, all I want are bakes filled with apples and spices and comfort! And these honey apple cupcakes are the perfect fit. Not only are they super easy to make, so so delicious and look adorable! They’re also packed full of spiced apple compote and deliciously sweet honey. Honey & apples are a match made in heaven to me, and they work so so well here.

How to make honey apple cupcakes

These cupcakes are super easy to make. Though I do like to create fancy cakes with fancy buttercream and fancy toppings; when it comes to cupcakes I always like to make them fairly simple. Cupcakes are a bit of fun and I think they’re a great first bake to make with littleun’s and just a great quick bake you can whip up in an afternoon! So if you’re looking for more great cupcake recipes, be sure to check out the archive!

Cupcakes are one of the quickest and easiest bakes you can make, but to make sure your cupcakes look a cut above the rest follow these tips;

If you follow the tips above, I promise you, everyone will be asking you to cater their next party!

So, back to the cupcake batter. Like most sponges, this recipe uses the creaming method. So first beat together the butter and sugar until really light and fluffy. Then add the honey, vanilla and eggs – one at a time. Next add in the dry ingredients, and finally the milk. Then you can divide the batter between your cupcake cases/liners and bake! Super simple.

Dried apple slices are one of the easiest ways to decorate a cupcake or cake, and make it look way fancier than it is! Just thinly slice an apple, you could use a mandolin if you have one, and lay flat on a baking tray lined with baking paper. Then bake for 50 minutes at 140C/120C Fan/Gas Mark 1 and thats it! They’ll be crisp, and really delicious. So if you want to make extra for a snack, go for it!

As these have a long bake time, pop them in the oven once your cupcakes are already baked. This way while the cupcakes are cooling and you’re making the compote and buttercream, they can be baking away.

This is a very chunky compote, that adds the perfect moisture to the cupcakes and SO much flavour! It’s so simple to create by placing chopped apples, a cinnamon stick, butter, sugar, lemon juice and a little water to a pan. Then you simply cook it down, until the apple begins to disintegrate and caramelise slightly. Honestly your kitchen will smell so so good at this point! Then you can just leave it to cool, while you get on with the buttercream.

American style buttercream is really quick & easy to make, so perfect for topping cupcakes! All thats needed is to beat the butter on a high speed, add the icing sugar, beating again, and then adding the flavourings. In this case honey! And I’ve also added a little milk to help the buttercream get to the perfect piping consistency. But make sure you whip it for the full length of time stated, otherwise your buttercream will be thick and may end up a bit grainy.

I used the Wilton 2D piping tip to pipe my buttercream on top of the cupcakes, but you can choose whichever piping tip you prefer!

Why are my cupcakes dry and flat?

Dry flat cupcakes are usually due to over mixing the batter, especially once the flour has been added. Try to stop mixing your batter as soon as all ingredients are incorporated, and if you are using a stand mixer or electric hand-whisk use a low speed setting.

I can’t get gala apples where I live, what else can I use?

I don’t have a piping bag! What can I use instead?!

If you have a plastic food/sandwich bag, you can snip off one corner and use this like a piping bag. But the piping is purely for decoration, so you can just spoon it on with a spatula instead if you’re struggling!

These cupcakes are so moist, so light and packed full of warming autumn flavours. The spiced apple compote is so delicious and pairs so well with the sweet honey buttercream and the crisp dried apple slice. I really hope you love these as much as I do! Let me know below if you give them a go! 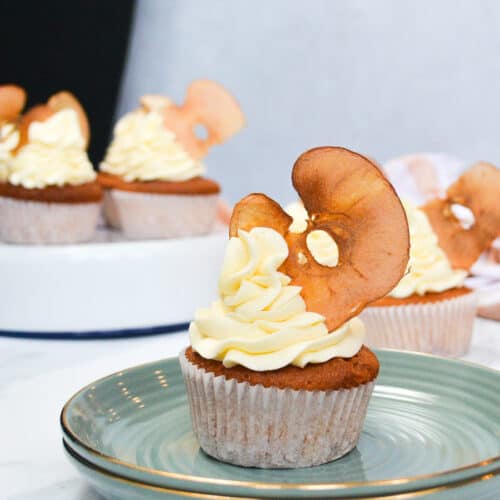