Ginger & lemon striped Christmas cake. A delicious alternative to fruit cake, that is the perfect centerpiece for your Christmas table!

I’m sure I’ve mentioned it before on the blog, but I’m not a huge fan of a traditional Christmas cake. The heavy fruit sponge doesn’t excite me, and the layers of marzipan and either royal or fondant icing… justtt no. I’m sure there are some delicious traditional Christmas cakes out there, but for me I’d rather make something a little lighter and a lott more interesting.

Ginger and lemon is a classic flavour combination, and I’ve made this cake combo quite a few times over the years – though never on the blog! For me, it works so well. Sticky ginger cake that’s packed full of flavour and a lemon curd American buttercream. This cake also has vanilla American buttercream for the exterior and a cheats white chocolate ganache drip. I say cheats, as I used candy melts. This helps to create the crisp white colour I wanted, rather than the slightly yellowed colour you get with real white chocolate. More on the drip later though, for now I want to focus on achieving the coloured stripes!

How to make a buttercream stripe cake:

So you may have seen striped buttercream cakes on Instagram or Pinterest orr pretty much everywhere at the moment to be honest. The trend started a few years ago and its showed no signs of waning yet. I think it can look sooo effective, but if I’m honest I was abit too intimidated to try it for myself. Until this year when I decided I wanted to create a stand-out Christmas cake.

So, for a buttercream stripe cake you will need:

Now, let me break down the process.

Firstly, you need to crumb coat your cake as usual and chill. Then coat it with your thick buttercream, in a thick layer. You want it to be thick so you can scrape around without scraping down to the cake layer. Smooth it out a little with the straight edge of your buttercream scraper, but don’t worry too much about this. Then, using the striped side of your scraper, begin scraping around the cake and creating indentations. Be careful to place your scraper in the same position each time, so you keep to the same indentations. You’ll need to do this a fair few times to create deep enough indentations. Then the cake needs to chill. This is extremely important, otherwise your stripes will end up in a mess!

Once your cake is chilled and the buttercream feels hard, you can pipe in your smaller batches of buttercream into the indentations, in alternating colours. Then with the smooth side of your scraper, scrape around the cake to smooth out. This will look like a mess at first, but I promise if you keep on scraping you will eventually see the clean lines come through!

There are two keys here:

1 – Make sure you clean your scraper in between each scrape. This will avoid the colours bleeding into eachother and looking messy.

2 – Don’t overdo it. The worst thing you could do is scrape too much, and you begin to see the cake underneath. Sometimes you just have to know when to stop while you’re ahead.

I hope reading the above helps, but I’ve also included a timelapse of the process below which I hope helps you to visualise it!

How to make a white chocolate drip?

Okay, you’ve made the cake, created the stripes. Now for the drip.

Though I do love white chocolate, its definitely not the easiest to work with and especially not for a drip. It doesn’t look a true-white colour and for this cake, I really wanted it to be snowy white. So I turned to candy melts. If you’ve not heard of them before, they are a sweet confectionary coating that are made to emulate chocolate. They are super sweet, so I wouldn’t use them in place of chocolate for cookies or in a cake. But for a drip, they’re perfect.

I made a ganache with the candy melts and cream and let it cool just enough that it was a little thickened. Then I began ‘dripping’.

I find it best to create the drips first, then fill in the top of the cake afterwards. This way you have much more control over the length of the drips. You can do this with a squeezy tube if you have it, a piping bag or I just used a spoon.

Be gentle at first, gently coaxing the ganache off the edge of the cake. You can always add more ganache to make the drips longer, but you can’t make them shorter!

Also, make sure you’ve chilled your cake before adding the drips! This will help to control the length of the drips, as the warm ganache hits the cold cake it’ll cool and slow down.

I really hope you like this cake as much as I do. I think it gives a really different take on the usual Christmas cake, but its still equally as festive and delicious! 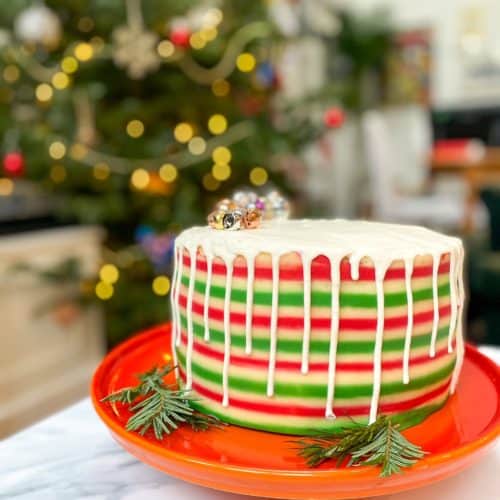 Want another alternative Christmas cake? Why not try my earl grey buttercream wreath cake? Or chocolate and mint vertical cake?