A light chocolate sponge with creamy mint buttercream – this mint chocolate cake is delicious and sure to impress with its vertical layers inside!

Mint chocolate chip was ALWAYS my favourite flavour ice cream as a kid. I’m not sure what it is about the combination that I love so much, but its definitely not just me. This is a beloved flavour mix across the UK. After Eights, Matchsticks, Aero….I could go on. Mint is seeping into chocolate all over the shop, and I’m all for it. So when I wanted to create a new layer cake, it seemed like the perfecttt choice.

My boyfriend proclaimed that its ‘basically Vienetta as a cake’ which was a BIG compliment from him. So I’m chuffed and will be using that as the official tagline from now on. Because we all know Vienetta is the best thing ever.

So lets get to it…

How do you make a vertical cake?

Now lets be clear, I think I still have some way to go in nailing a perfect vertical cake. There are some beautiful cakes on the internet with perfectlyyy straight lines. However, most things I bake have a certain rustic charm and this cake is no exception! 😉

So back to the technique. When I first saw a picture of a vertical cake it confused me SO much. I honestly couldn’t understand how it was made. But its so much simpler than I realised, and honestly makes alot of sense.

A vertical cake is essentially a massive swiss roll. You bake two sponges in a swiss roll tin, cut them each in half to create four thin strips. And then roll them up and around eachother to create a cake. It’s shorter than a usual three-layer cake but a little wider. Now you may wonder how the cake stays in the curved position, but just like you would for a swiss roll you roll the cakes while they’re still warm so they ‘remember’ their position.

I decided to film the assembly of my mint chocolate cake, because I knew it would be a little tricky to explain. But of COURSE this particular time my sponges cracked – disaster. I’m not gonna lie to you though, I didn’t have the time/energy/resources to make it again to re-film so I’ve left it as is. Partly because I feel like it actually helps to see that even if the cake cracks, once you’ve assembled it and covered it in buttercream you really can’t tell. It will still look beautiful 🙂

I hope that helps – at some point in the future I’ll try and re-film it to show you how it should look not cracked..:/ As I said though, rustic is always more my style haha

So what’re my top tips for the perfect mint chocolate cake, that also happens to be vertical!?;

I really hope you like this and give it a go! The cake is delicious but its the vertical sponges that really make this an impressive bake! 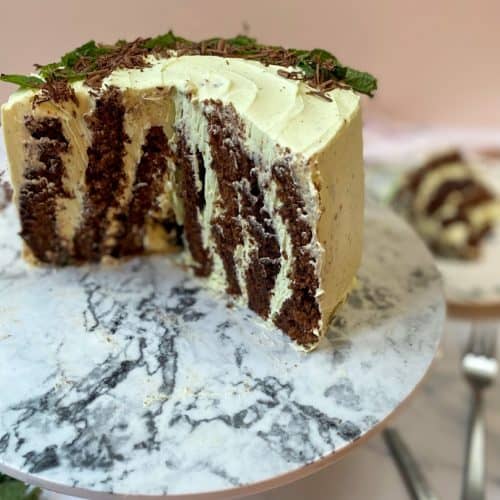 Looking for more mint chocolate? Why not try my twist on the classic Viennese whirls?!