Snickerdoodle…?! What is this I hear you cry. No it’s nothing to do with a snickers bar or a breed of dog. It’s actually a cinnamon cake. The origin of the word is a little uncertain, but I first heard it when I was at university and a friend gave me a slice of snickerdoodle cake. It was DELICIOUS and I often thought about it over the years, but never got a hold of the recipe. This snickerdoodle traybake is therefore my made up version in homage to the university cake.

A snickerdoodle is extremely common in the USA, but pretty unknown in the rest of the world. It’s also usually in the form of a sugar cookie (soft biscuit), except its rolled in cinnamon sugar rather than plain white sugar, and the biscuits usually have a cracked surface. I’ve never actually eaten the biscuit form, but I loveee anything cinnamon and snickerdoodle traybake sounds way more interesting than a cinnamon traybake.

What goes into a snickerdoodle traybake?

So let’s get into it shall we! I don’t know about you, but I love a traybake. They’re perfect when you want to whip up a quick cake, especially as they often don’t need any buttercream added! It also makes storing it in tupperware a million times easier….does that make me old for thinking that’s a pro??

So lets get into the method for the cake. The vanilla cake is really easy to make and follows classic steps. Creaming the butter and sugar together until light and creamy, adding eggs and vanilla. Then adding the dry ingredients until the mixture is super thick. Finally, milk is added to loosen it a little, though the batter will still be thick. And voila, the cake is done.

To create the cinnamon swirl in between the cake, firstly you need to make the cinnamon batter. This is a mixture of melted butter, light brown sugar, cinnamon and flour. It will be super thick – apparently a recurring theme for this cake! To add it within the cake, you want to spread 2/3 of the cake batter into your tin, then add the cinnamon paste and finally the remaining cake batter. As both are thick, you’ll need to spread the final layer of cake batter gently otherwise you’ll end up with the cinnamon layer mixed with cake batter in a mess on top. The cinnamon layer will sink a little while the cake is baking, but thats okay. We’re going for rustic charm in this traybake! The final step is to sprinkle a combination of ground cinnamon and caster sugar all over the cake, before putting it into the oven to bake. This not only gives a delicious sugary flavour and crunchy texture, but is reminiscent of the traditional cracked surface of the snickerdoodle cookies.

The cake is really light, the cinnamon swirl slightly chewy and packed full of flavour, all topped with a crunchy cinnamon sugar crust. I’m so happy with how this turned out, and I hope I’ve inspired you to try your own snickerdoodle traybake! 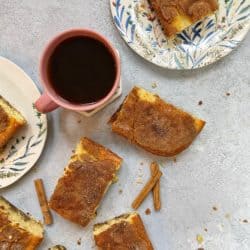