Chocolate malted milk biscuits are my no.1 favourite biscuit, with a plain malted milk coming in a close second. Dipped in tea they are just SUBLIME. I love them. So what better way to show my love than by turning them into cake?! All of my favourite things combined 🙂

To give a quick summary; these are malty sponges filled with smooth chocolate, topped with a malty buttercream, malted milk biscuit crumbs and a chocolate drizzle. So. Much. Goodness!!

Now, you may be wondering…

What is malted milk?!

Without going too wordy/sciencey malted milk is a powdered combination of malted barley, wheat flour and evaporated whole milk. It was first developed by James Horlick who wanted to create a supplement for infants. Malted Milk was actually originally called ‘Diastoid’. A play on words as malt powder comes in two forms, diastatic and nondiastaic. But as you can imagine…Malted Milk sounds a hell of alot more appetising!!

Malted milk is used in my beloved biscuits, in milkshakes, hot drinks and of course Maltesers!! Or Whoppers if you’re American.

So how do you make chocolate malted milk cupcakes?

First up you need to get hold of some malted milk powder. I opted for Horlicks, but Ovaltine will do just fine too! The actual powder is added to the cupcake batter which gives the most delicious malty flavour. And oh my GOD the batter is sooooo delicious. Honestly, I could have eaten the whole bowl. I really had to restrain myself.

The malted milk powder will also go into the buttercream. The powder is so fine your buttercream won’t taste gritty but I can tell you it’ll be delicious!

Now I think what really makes these malted milk cupcakes so delicious, is the chocolate filling. This is so simple, its just a chocolate spread like you would get in the jam aisle. As it stays fairly ‘runny’ it makes the cupcake so deliciously moist and obviously pairs beautifully with the malted sponge and buttercream.

The final decorations of crushed biscuits and a chocolate drizzle, are obviously an extra touch that isn’t exactly essential. But I think with cupcakes its allll about the looks, and the more pretty decorations the better!!

Wait, but how do you get the chocolate filling inside the cupcake?!

This honestly couldn’t be simpler. Some people use cupcake corers, but I just use an everyday kitchen knife. Once your cupcakes are cool, cut a small circle into the top of the cupcake, angling your knife on the diagonal so you can remove a little pointed round of cake.

I really loved how these malted milk cupcakes turned out (and got rave reviews from my boyfriends work colleagues!), especially as they’re so simple to put together. I hope you love them too!! 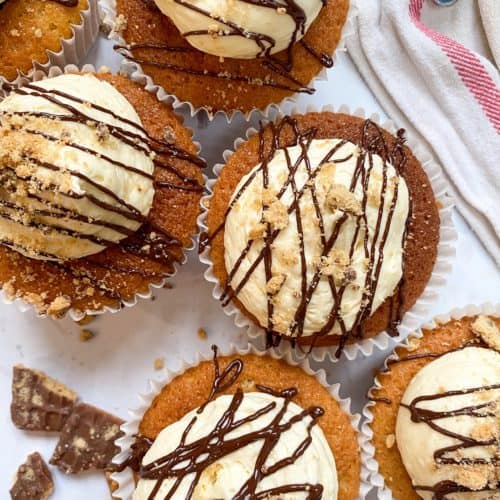