These cupcakes use the caramelised white chocolate to its fullest extent! Its beaten into the sponge, whipped into the buttercream and added as little disc decorations! Honestly, it may seem abit much but the flavour is subtly gorgeous. I’ve also added a hidden caramel centre, which oozes out gorgeously.

How do you caramelise white chocolate?

Caramelisng white chocolate is surprisingly easy, but you do need two things:

To caramelise the chocolate, we need to continually heat it and stir with 10 minute intervals for about 40-50 minutes. You can do this in the microwave, but I find it much easier in the oven, so that’s the method I’ll be sharing today.

First up, the chocolate. You need white chocolate that has a high cocoa butter content, ideally between 29%-32% (at the very least 28%). I’ve used Menier White Chocolate (30%) before, which is available in supermarkets and it was great! But my favourite chocolate to use has been Callebaut’s W2 callets. This has a minimum cocoa butter content of 29.5%, so actually slightly less than the Menier but its such a gorgeous chocolate to work with – the flavour and texture are just sublime. Also, the chocolate is in callets (i.e. small drops formulated for melting) which makes it perfect for this process as the chocolate is evenly sized which makes for even melting.

A chocolate with a lower cocoa butter content will not melt evenly and may dry out – making for a sad caramelised white chocolate!

So once you have your chocolate, set your oven to 125C/105C Fan/Gas Mark 1/2 (basically your lowest setting) and get a large lipped baking tray out. If your baking tray is non-stick and free from any scratches you can go ahead and place your chocolate directly onto the tray. If not, line it with baking paper or a silicone baking mat. Then place in the oven for 10 minutes.

The key here is, that after those 10 minutes are up you need to THOROUGHLY stir the chocolate. Get every last bit mixed, and make sure the whole thing is liquid before you place it back in the oven for another 10 minutes. This step will become clearer as the process goes on, as the longer the chocolate cooks the harder it will be to stir when it first comes out the oven. If it looks a chalky dry mess, DONT WORRY. Just keep stirring and it will come back together.

But remember. Don’t put it back in the oven until its completely liquid again.

As the chocolate cooks it will take on a gorgeous golden brown colour. I find it best to repeat the process 4 times, but you could keep going for 5 or 6 if you really want to deepen that flavour.

And there you have it! Gorgeous, silky caramelised white chocolate. Once its cooled a little, its ready to use in the cupcake batter and the buttercream. Then the remainder can be spread onto a baking tray and left to set, to create the cupcake decorations.

I really hope you love these cupcakes as much as I do! It was so fun to use the caramelised white chocolate in the sponge AND buttercream. And of course the oozy caramel filling adds a delicious surprise and keeps the cupcakes nice and moist (sorry!). 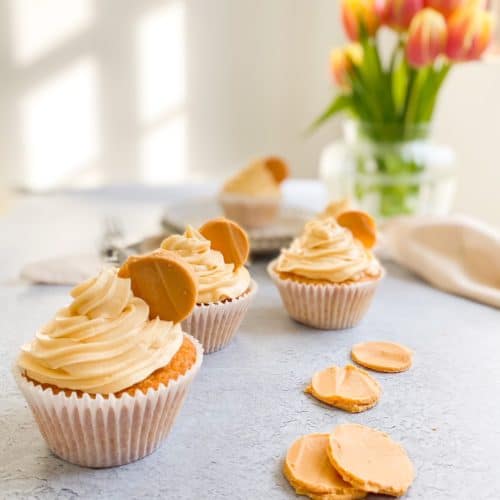