Danishes for breakfast, are to me; one of lifes great pleasures. The star of a Sunday brunch and there are just SO many delicious variations. One of these being a classic raspberry danish. Flaky golden pastry, creamy creme patisserie and tart raspberries on top. Its a delicious combination of flavours, but I’ve added a little extra, with lemon icing drizzled onto the pastries once baked. It adds a little tangy sweetness which really pushes these danishes to the next level.

Now, danishes being a laminated dough inherently require a little more work than your average bake. But don’t let that put you off! Once you’ve got the hang of a laminated dough I promise you it won’t seem so scary. For me the process of the dough isn’t tricky and there really isn’t much hands on time but therein lies the problem. Laminated dough is allll about technique. It’s definitely something that you get better with practise at, but each attempt at these raspberry danishes will still be delicious so its worth trying!! Here’s what I’ve learnt so far:

Creme patisserie is an absolute stalwart in the baking world. Its added to a surprising amount of classic French bakes – souffles, mille-feuille and pain au raisins just to name a few! It is essentially a thickened custard and is usually flavoured with vanilla. It creates a delicious creamy base for fruits, so is often used in tarts and danishes. Though it may have a fancy French name, it isn’t too tricky to create. You do however need to have all your ingredients ready to go, as once you’ve started heating the milk it will all come together very quickly. One tip for creme patisserie?

Don’t take your eye off it and keep whisking! It will go from looking fairly thin and creamy to thick very quickly.

The final elements for these raspberry danishes are pretty simple. Raspberries dotted on top of the creme patisserie before baking. And a simple icing is made with icing sugar and lemon juice to be drizzled on top once the pastries are baked. These danishes are absolutely perfect for a breakfast or brunch where you want to impress! I really hope you enjoy the raspberry danishes as much as I did! 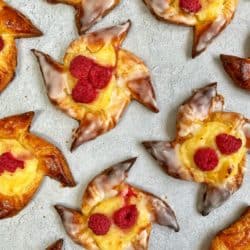 Hi!
I'm Aimee, 29 year old Londoner who loves all things baking. My ultimate goal is to publish my own cookbook one day. But for now, read on to find recipes for huge layer cakes, delicate tarts and decadent cupcakes.
Enjoy!