I have a confession.

I am obsessed with watching Instagram videos of cakes. Specifically cakes being lavishly smothered in buttercream, covered in intricately piped buttercream flowers or ganache dripped round the edges. Its taking over my life.

Craig is so sick of watching them over my shoulder, but its my absolute guilty pleasure! Its super satisfying and so therapeutic.

So when it came to making my sisters birthday cake, Instagram was my first source for inspiration. Buttercream flower wreath cakes are all over Instagram, Pinterest, YouTube…you name it! So I thought I’d give it a try. I actually practised the roses on some cupcakes a few weeks back (blog post to come!) and let me tell you it is notttt as easy as people make it look! But practise makes perfect and all that! I used swiss meringue buttercream for the flowers, the light texture is perfect for this kind of piping. Although in the August weather you do need to work quickly so it doesn’t get too warm, it makes it impossible to pipe the delicate petals then!

I made about 25 buttercream flowers in total, though I only used 19 in the end. I made roses, ranunculus, chrysanthemums, blossoms and topped them all off with leaves! The leaves were piped direct onto the cake though – thats the fun final touch!

To make the flowers you absolutely need a flower nail. They’re usually included in most piping sets, so you might already have one! If not, you can buy them easily on Amazon. You also need to cut a load of squares out of baking paper, I promise its not as labour intensive as it sounds. Once you have both those things and an array of piping tips you’re all set up! I watched a lot of YouTube videos by Cake Style for amazing tutorials on loads of different buttercream flower types. Once you have the plain roses down you can make quite a few pretty variations, but its the chrysanthemums I struggled with. The tutorials make them look so easy but its definitely not my strong suit, which is annoying because they can look so pretty!

I was pretty pleased with the flowers I created in the end though, and its definitely evoked a passion in me to create more flowery creations! Piping tips wise theres a few you need to have in your repertoire, but if you’re going to get any the Wilton 104 is the one to get. The 104 is what I used to create all the roses, ranunculus and blossoms. You’ll need Wilton tip 81 for the chrysanthemum’s and for the leaves Wilton tip 70.

Honestly though, I was sooo pleased with how it turned out! You know how usually you have the idea for a cake, and then when you come to make it its nothing like the vision? This actually was my vision!! I made it the day before I presented it to my sister though and I had nightmares all night of ridiculous things happening to it. Like the candles causing the whole cake to go up in flames – could that even happen!? I think i’ve waffled on long enough about the flowers now, you probably want to hear about the actual cake!? It was a white chocolate sponge, with the nicest crumb texture! The recipe I was adapting called for cake flour, which isn’t something I’ve seen in the UK. After a bit of googling it turns out that you can substitute cake flour by the following: for every one cup of plain flour, take two tbsp’s out and replace it with two tbsp’s of corn flour. Cake flour has a lower protein content than regular plain flour, which gives cakes a softer, lighter texture whilst still retaining structure. I think i’m converted.

For the buttercream I decided to pair a classic flavour combination with the sponge; raspberry! I also figured a raspberry swiss meringue buttercream would keep the cake light and not cloying. Especially with all those buttercream flowers on top! Also, if I’m honest the smooth and silky buttercream is just a million times easier to spread on a layer cake.

I followed my swiss meringue buttercream recipe as normal, and then for the last step added fresh raspberry puree that I’d strained. This gives a really fresh flavour, and means the buttercream is food colouring free! I also added freeze-dried raspberries in the layers for an extra raspberry kick – well I say that, thats what I intended to do! But I forgot to do it on the first layer – doh! – so lets all just pretend I did it on both! The raspberry SMB recipe errs on the side of caution so you’ll definitely have some left – I had a full tupperware box! But you can pop it in the freezer for up to 6 months – hooray! Just make sure its defrosted and back to room temp before using it.

And finally, I decided to live my Instagram dream and film the assembling of the cake. So if you want to see it all come together, watch below! (Apologies in advance for the slight out of focus :(!) 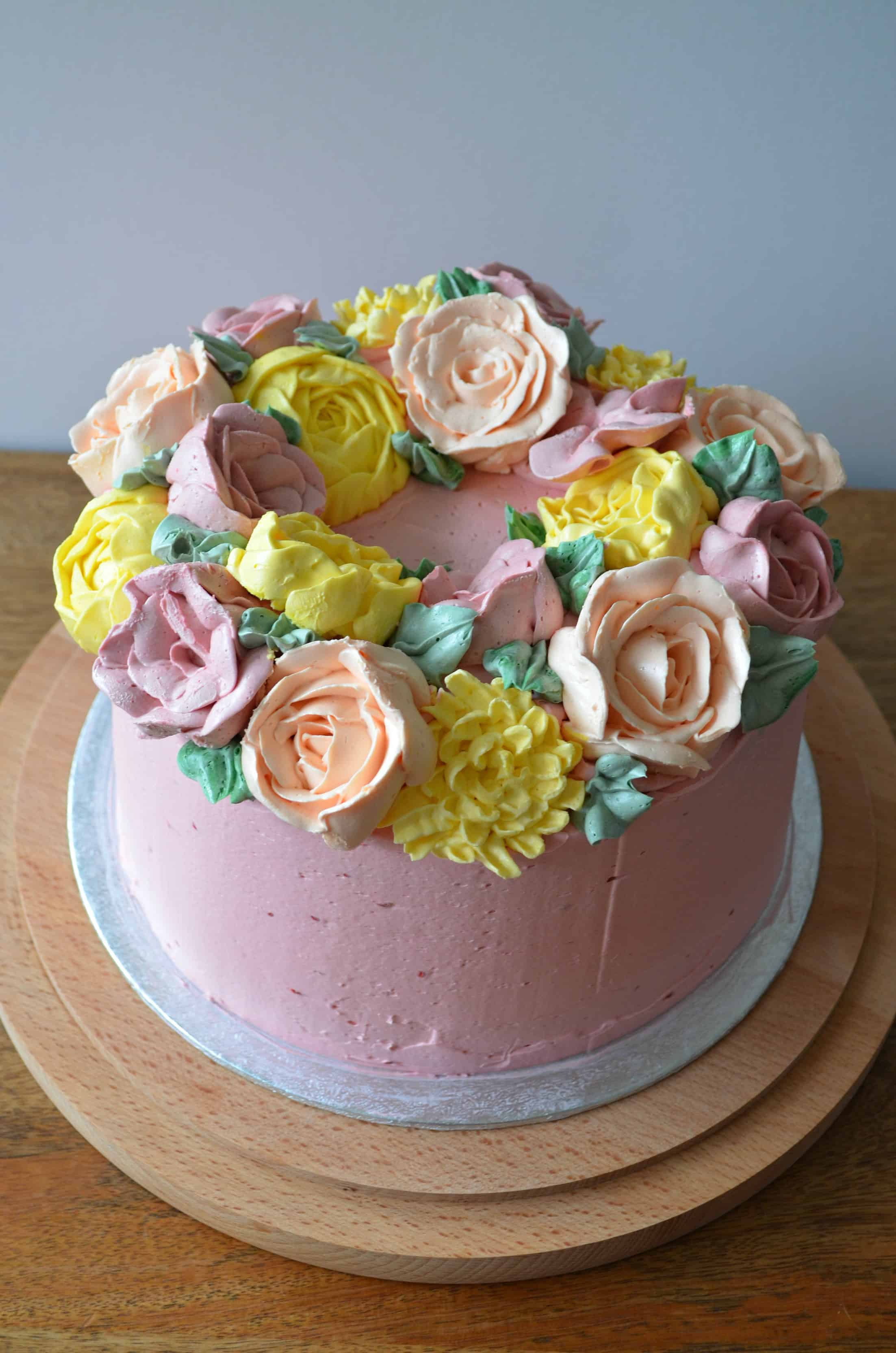 Excess frosting can be frozen for up to 6 months, and then defrosted fully before use.
Keyword buttercream flowers, Raspberry,, swiss meringue buttercream, white chocolate
Filed Under: Cakes
Welsh Cakes
Raspberry and Almond Layer Cake