Cake, Cake, Cake, Cake. Is there anything better? I mean even Rihanna released a song about it….! But Birthday Cake probably tips the scale! I made this raspberry and almond layer cake for my mum’s birthday last weekend. Fresh raspberries gave the tang, ground almonds made it super moist and the buttercream and sprinkles made it extra birthdayish! Who says sprinkles are only for kids?! Almond and raspberry is SUCH a classic combination and one of mums favourite flavours so I knew I wanted to incorporate that in the cake. I ended up baking fresh raspberries in the sponge, which gave such a good tart hit. I added ground almonds too which made the sponge extra moist, AND I added two teaspoons of almond extract to give it that extra punch. I can never have enough almond, but feel free to reduce it to one teaspoon if you’re not as obsessive as I am!

I’m still so obsessed with swiss meringue buttercream and the silky effect it creates. I love how the swirls on top almost look like a 99 ice cream you’d get when you were little! I went for vanilla to complement the raspberry and almond but not overpower it. Though you’d be forgiven for thinking the buttercream was mint or pistachio flavoured with the mint green hue. That was just a mistake! I was trying to make my buttercream whiter, so I added in (what I thought was) a tiny drop of blue food colouring. As you can tell, that plan didn’t quite work out. But, I’m actually pretty happy with the colour in the end! It encapsulates the childhood birthday cake style I was looking for! Filling wise, I decided to go classic birthday cake and use jam and buttercream. I used the buttercream as a dam around the edge of the cake, and then filled the centre with raspberry jam – Bonne Maman to be exact, only the best! I’m so glad I did to, as the tartness of the jam worked so well in cutting through the rich buttercream. The sprinkles were much harder to add on than I imagined, so learn from my mistake and if you have a tilting turntable use it to its full advantage to stick them on! I on the other hand ended up essentially chucking the sprinkles at the cake and finding them all over my kitchen instead….!

All in all, taste wise this is one of the best cakes I’ve made (if I do say so myself)! So if you’re a fan of raspberry and almond definitely give it a try! Also, give my timelapse video below a watch where you can see me assemble the cake 🙂 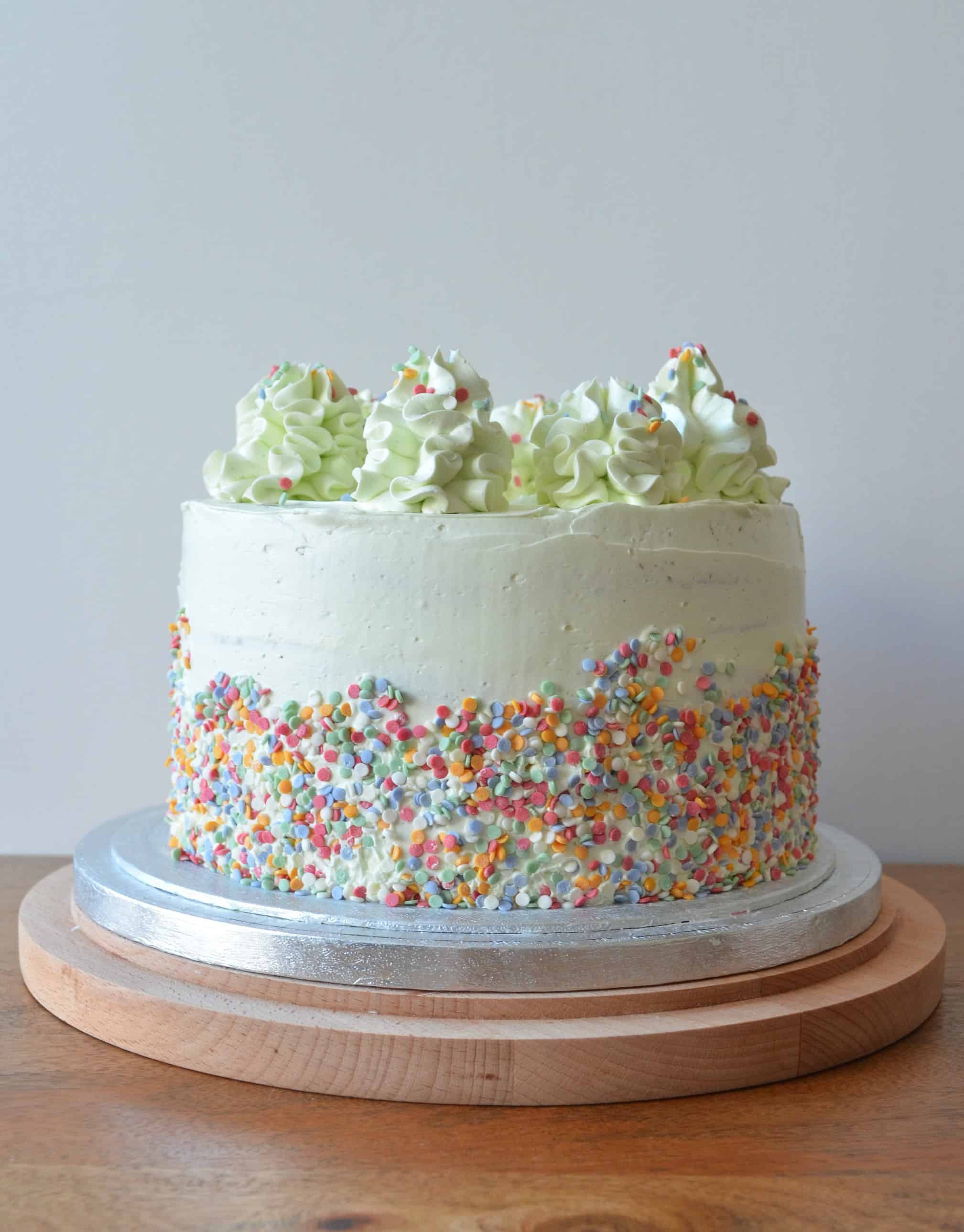