Fudgy, chewy, jammy. These white chocolate cherry blondies are going to be your new favourite traybake! So simple to make, but so delicious!

Blondies vs Brownies. The age old debate. I’m personally a big fan of blondies but they can be a super sweet cakey mess. So I can totally understand why brownies usually win the debate. But honestly, I think these blondies will change any brownie fans minds! They’re so fudgy, chewy, perfectly sweet with a crisp top and packed full of sticky cherry jam. And did I mention there’s melted white chocolate AND white chocolate chunks in the mix?? They’re seriously so good!

I have a couple of blondie recipes on the blog, but for these blondies I tried a new technique. I modelled them off my favourite brownie recipe to try and get a better fudgy texture, and boy did it work!

So just like when making my brownies, the first step is to chop the chocolate really finely. However, for these blondies you only want to finely chop 150g of the chocolate. The remaining chocolate can be chopped into rough chunks to be stirred into the batter later! I loveee the texture these provide.

Once you have your 150g of finely chopped chocolate (and I mean finely!), melted butter should be poured over and whisked together until the chocolate has melted. This will look gloriously silky! Both sugars can then be whisked in until combined. You can do all this with a hand whisk, no need for any fancy equipment!

Next the dry ingredients need to be added – so your plain flour and salt. The mixture will be really stiff and thick at this point. Next the eggs and egg yolk should be whisked in, Your mixture will look really thick and luscious by this stage. Finally, add in your remaining chocolate chunks.

Once your batter is ready, pour it into a lined 8x8inch square tin. It’s important you use the correct size tin, as the baking time will be affected if you use a tin that’s smaller/larger. Lining your tin is also really important, as we’ll be chilling the blondies in the freezer, and they’ll be much easier to get out by pulling on the baking paper.

With your batter in the tin, you can then dollop spoonfuls of the cherry jam over top. Then using a skewer or small knife, swirl the jam throughout the blondie batter in an irregular fashion. Just try not to swirl so much that you can’t see the defined swirls, as it can end up looking like a mess!

Then its time to bake!

Baking blondies or brownies is always trickier than say, baking a cake. As the usual ‘clean skewer’ trick to test if a cake is done, doesn’t work, as you want your blondies to be a little under baked! That’s what gives them their delicious fudgy texture. So instead, you want to wait until your blondies have turned a golden brown colour and they have a slight jiggle in the middle. I like to wait until the minimum cook time, then test for the jiggle every now and then. Better to be under baked than over baked, when it comes to blondies in my opinion!

The next vital step in baking these blondies is to have patience. Once the blondies have cooled to almost room temperature, they need to be chilled in the freezer for at least 2 hours before you cut into them. This will give them the best fudgiest texture AND give you a much cleaner slice.

Can I freeze blondies?

Yes absolutely! You can even eat these blondies directly from the freezer too! Just make sure they are all individually wrapped in cling film, and you can freeze them for up to 3 months.

How do I know when blondies are done?

The trick is to look for a golden brown top, and a slight jiggle in the middle. Blondies continue to bake outside the oven, so removing them when they are slightly under-done will result in fudgy blondies.

Can I swap cherry jam for another fruit?

Yes absolutely! If you prefer strawberry, raspberry, blackcurrant jam etc. then swap it out no problem. Just make sure you like the combination with white chocolate too!

These white chocolate cherry blondies are my favourite blondie I’ve ever made. They’re SO fudgy, chewy and I love the little pools of jam in each slice and the crisp flaky top. And honestly they’re so simple to make, and mostly require store-cupboard ingredients. Making them the perfect quick bake! 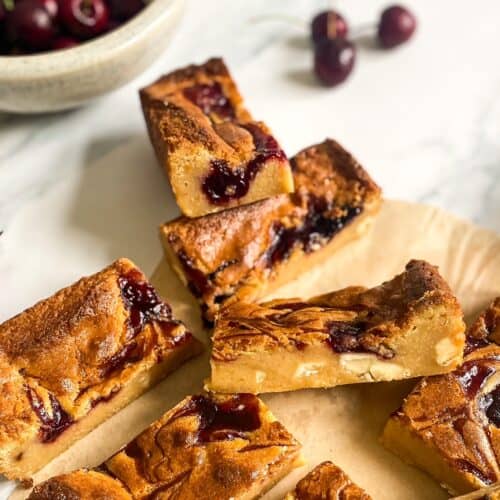 Blondies are best kept in the fridge in an air-tight container. Blondies will keep for 4-5 days.  Blondies can be frozen. Wrap each blondie individually in clingfilm before freezing. Blondies can be consumed direct from the freezer.
Keyword apricot jam, blondies, cherry, white chocolate
Filed Under: Brownies/Blondies
Easy Snickers Style Brownies
Fudgy Mini Egg Brownies