Now I hear what you’re thinking. Discard doesn’t sound like something I’d want in my cookie! But dear reader, you must reconsider. These are the most delicious cookies everrr and using up sourdough discard is a major win!

What is sourdough discard?

If you’re familiar with nurturing a sourdough starter, you’ll be well aware that it takes alotttt of feeding. Its essentially like having a pet, except you can leave this one in the fridge for a few weeks at a time! When your starter is in constant use however, it will need to be fed atleast two times a day. And by fed, I mean given flour and water in equal quantities.

Now obviously if you just kept feeding a starter, it would become enormous! So this is where the discard part comes in. Every time you feed the starter you ‘discard’ some too. This is clearly a big waste, as you’re chucking ingredients down the drain! Which is why discard recipes are so sought after!

As the discard is essentially just flour and water, it can be substituted into a lot of recipes, though it does take some adjusting. Which is where these delicious cookies come in!

So I first read about the idea of making sourdough cookies on Edd Kimbers blog The Boy Who Bakes. He’s an incredible baker who I’ve followed since he won the first series of Bake Off. I thought his idea was just GENIUS. And its what inspired me to create my Sourdough Madelines!

The sourdough discard gives the cookies a subtle sour tang which is just so delicious. Honestly, they’re the best cookies I’ve made. Hands down.

So inspired by Edd and his cookies, I set to work figuring out how I could veganise it!

Honestly I’ve really enjoyed creating vegan recipes this month and I think I’m definitely going to include more vegan baking into my regular schedule. I’ve definitely ended on a high with these cookies though!

They’re chewy, soft, sweet and salty. Everything you could want in a cookie, and they’re INCREDIBLY moreish still warm from the oven. Honestly, its dangerous. 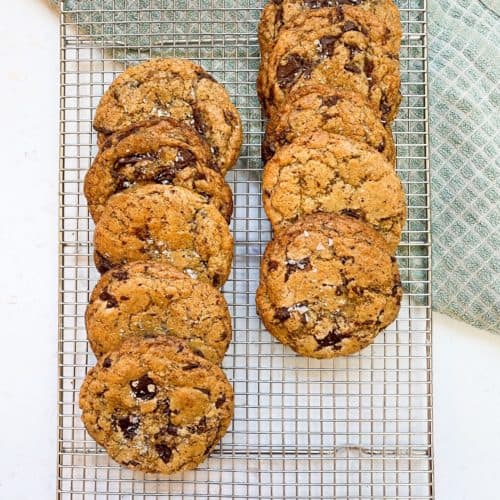