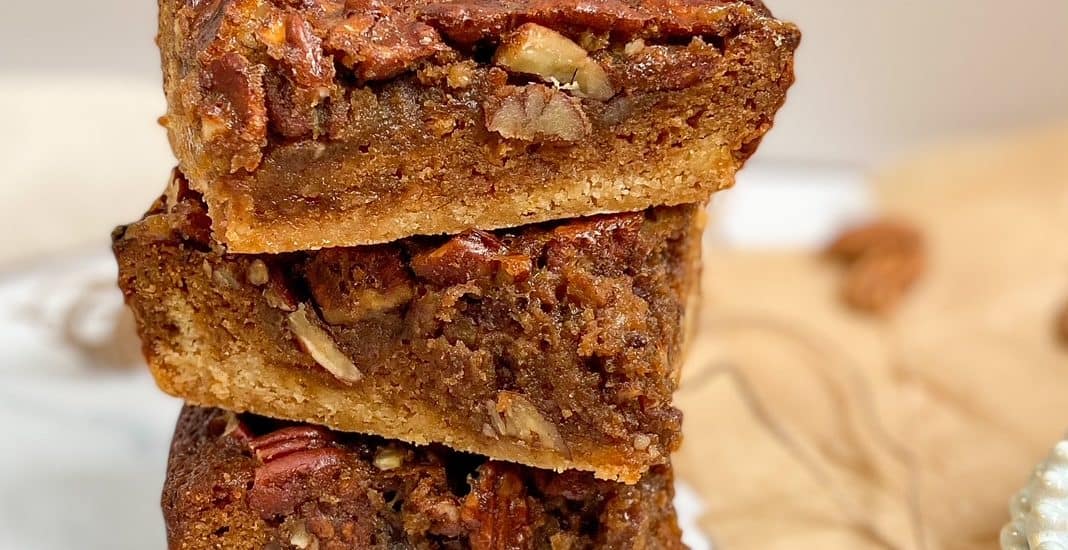 This recipe is one of my absolute favourites that I’ve ever created. So I’m super excited to be writing this post up now!! If pecan pie is on the dessert menu then I am 100% always choosing it. You don’t often see it, and to be honest I rarely make it too (which I’m now wondering why!?) so if its there, I’m having it. I’m a big pecan fan anyway – case in point, I have four pecan recipes on the blog! But pecan pie holds a special place in my heart.

The moist sugary filling and the toasty nuts complement the crisp pastry base so well. But when it comes to these pecan pie bars I wanted to create something slightly different and test out a pastry I’ve wanted to try for a while.

If you’re a big fan of French baking like me, you may have come across sable breton before. It’s a super buttery biscuit from the Brittany region that is really crumbly and soft, sort of like an English shortbread but without the excess sugar. Now usually sable breton would be in biscuit form, but! It can also be used as the base of fruit tarts and I thought it’d make an excellent base to my pecan pie bars. And oh boy was I right!

Because sable breton is inherently soft and crumbly it gives the bars more of a cakey feel. There’s no harsh crunchy pastry or biscuit on the base, its softer, chewier and it REALLY works. Honestly, I could have eaten the whole tray of these.

So what goes into a pecan pie?

Now you may be wondering what’s actually in a pecan pie, and to be honest its a lot of sugar! Pecan pie definitely isn’t one for the health conscious, but it is truly worth the calories in my eyes!

The dark brown sugar gives the pie bars such a gorgeous depth of flavour and the cinnamon makes it taste sooo autumnal. It’ll also make your kitchen smell incredible!! Like a bakery at Christmas time!

How do you know when pecan pie is set?!

The key to a pecan pie setting, is abit like a cheesecake. You want to wait until only the verrryy centre of your pie has a little jiggle. Then you’ll know its done. Like most bakes, the very centre will continue to cook once you’ve taken it out of the oven from the residual heat alone! So a slight jiggle is okay, and it’ll make sure your pie is still nice and moist!

So this bake needs to be completed in stages. Firstly, you’ll make the sable breton dough which then needs to be chilled for 2 hours. I know its a long time, but trust me its needed.

Once its nice and chilled, press it into your baking tin, you don’t need to be too precious about it. Then while its baking you’ll want to prepare your filling. This is super simple – everything bar the nuts just needs to be combined in a small bowl. Then once the sable breton is baked, you can scatter the chopped pecans over, top with the liquid filling and bake again.

The hardest part, like with most bakes, is that you’ll need to wait until its completely cool before cutting the bars and tucking in. Otherwise you’ll be left with an un-set mess and it’ll be a disaster! Honestly. Please trust me on this!

I realllllly love how these turned out. They also lasted for a full week in an air-tight container, so they’re the perfect lunchbox snack for the week! Or elevenses with a coffee. Or pre-dinner snack. Or post-dinner dessert! So many options, just please make these! They’re so good!! 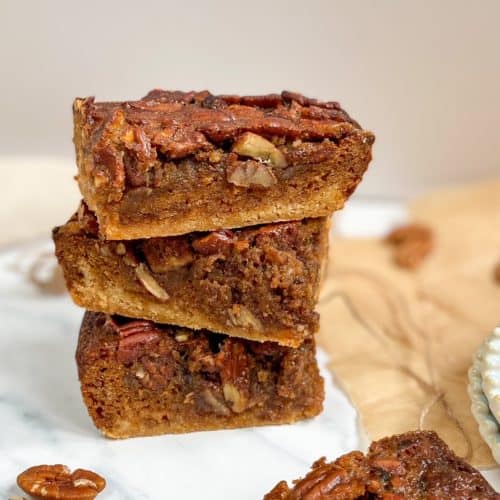