I’m a big fan of Birthdays, especially other people’s as its the perfect excuse to make a giant delicious cake! It was my Mum’s birthday last weekend, and I was really keen to create something that included her childhood love of honeycomb. So, ta dahh! The chocolate honeycomb genoise was born 🙂

My mum used to tell me about her and my uncle’s trips to the cinema when they were little. They’d go to the ‘pictures’ on a Saturday morning, my Nan would give them 2 and 6 pence in old money (12.5p to you and me!) and that’d see them to/from the cinema, buy them both a ticket AND sweets! Its just crazy when you think about it now. I really remember that Mum’s sweet of choice was always a block of honeycomb. No chocolate coating like in the Crunchie you get today, just pure honeycomb.

What’s actually weirder than the crazy low prices is that they would walk into a film halfway through! Films played on a loop back then, so you would watch the film to the end and then watch the start that you’d missed when the film begun again. SO WEIRD. I wanted to keep the sponge quite light, so I decided to make a genoise sponge. A genoise has hardly any fat and instead includes a lot of heavily whisked eggs to create an airy sponge that can be sandwiched with richer fillings! I wanted to make a more traditional buttercream this time, rather than my fave swiss-meringue, so the lighter sponge seemed perfect. The key to a good genoise, is whisking your eggs enough to get to the ribbon stage where a thick ‘rope’ of mixture falls and dissolves slowly on the surface of the mixture. This required about 6-7 minutes of intense whisking, so I’d definitely recommend an electric whisk otherwise it’ll take you much longer! Who needs the gym right?

The honey buttercream is a proper back to basics recipe – butter and icing sugar. Bam. Done. Except I added a squirt of honey to add to the honeycomb theme. I definitely recommend making this in a stand mixer if you have one, and leaving it to beat for a good 5 minutes at least. It turns so deliciously creamy, obviously you can do this with a hand mixer or just a spatula! Though your arm might be dead after the egg whisking for the genoise… The honeycomb is actually my favourite part to make, as the science behind it is just so cool! Geek glasses on please; when the bicarb is added thermal decomposition occurs meaning that the bicarb releases carbon dioxide. This is then trapped in the viscous mixture, leaving behind the lattice structure that sets hard. I just think its fascinating! It does mean you have to be pretty quick though, as it starts to set!

I crumbled up the honeycomb and sprinkled it over the middle layer of buttercream which added a really nice texture. The best part about this cake is that even with the honeycomb decoration on top, you’ll be left with a bag full of honeycomb for yourself! You could go wild and chuck it all on top of the cake, or you could melt some chocolate and make your own Crunchies! The possibilities are endless, and as long as you keep it air-tight it’ll last you months. Providing it lasts that long anyway… The final touch I added was a sugar syrup to keep the sponge moist and light. I didn’t add any flavour to the syrup, though you absolutely could! I really do think it added to the finished cake.

This chocolate honeycomb genoise is a real crowd pleaser and perfect for a celebration! Check out my timelapse video below of how I assembled it! 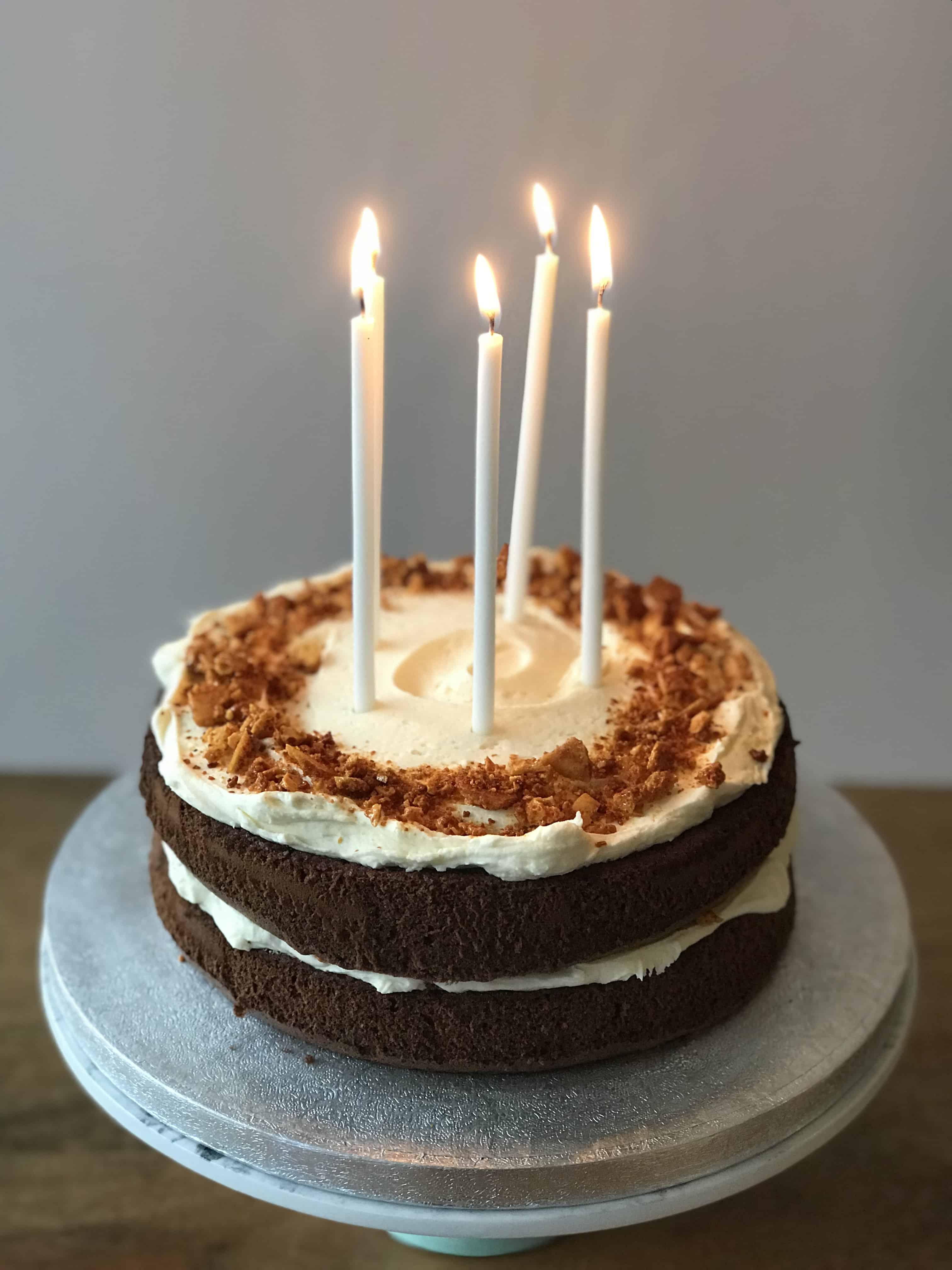