As you read this I will be living it up in Paris probably eating my weight in macarons, drinking red wine and definitely eating pain au raisins!! The French really know how to breakfast, I can’t think of anything better than a steaming mug of hot coffee and a warm pastry. It makes my morning porridge pale in comparison.

This was my first time making pain au raisins, I’ve made croissants before and other danishes but pain au raisins always seemed a bit tricky! I followed Edd Kimbers recipe to the letter, and it was surprisingly simple. Danishes seem like such an out of reach bake, but honestly give them a try! Yes they’re time consuming, but the majority of that time is the pain au raisins working on themselves while you can put your feet up. So just to pre-warn you now, if you’re thinking of making these this afternoon I’m afraid thats not going to happen. This danish pastry dough must be chilled overnight, to rest and rise. They’re a labour of love and you need to be up for the challenge. But I urge you not to be put off, they really are so worth it!! And everyone will be impressed with your house wife/husband skills.

For this recipe you need to grate the butter onto the dough. This really helps in distributing the butter without it getting too warm. Warm butter is your enemy when making pastries! It does look a bit like you’ve put a load of cheese onto raw dough, but its so much easier than trying to flatten butter with a rolling pin. Believe me!

The turning process is what gives danishes their lamination i.e. all of the delicious flaky layers! You’ll need to ‘turn’ the dough at least three times before leaving it to rest overnight. By turning I mean rolling the dough into a rectangle, then folding up the bottom third and folding the top third over the bottom third so all ‘thirds’ are on top of each other. The dough is then placed in the fridge for at least 20 minutes to chill. Before repeating the process, you then ‘turn’ the dough 90 degrees so the layers are folded in a different direction. Now I hate custard. Like hate it! But, even I have to admit the creme patisserie is the real star in these pain au raisins. I think it was the vanilla bean paste I used, it really made such a difference to the flavour. Please try and use the highest quality vanilla you can when making it, none of that vanilla essence will cut it! Creme pat is really easy to make, and thickens surprisingly quickly. You can make it the night before with the dough and leave to cool in the fridge, meaning you’re raring to go in the morning.

To actually make the pain au raisins, you simply roll out the dough, spread on the creme pat and scatter with your raisins. Then its just a case of rolling up and slicing! Make sure you allow for additional proving time in the morning once you’ve created the classic pain au raisin shape. Though they don’t need you to watch over them, so you’re more than entitled to pop back to bed before baking time! I really hope you love these as much as I did. They taste best fresh out the oven, but the remainders were still enjoyed by my work colleagues the next day! 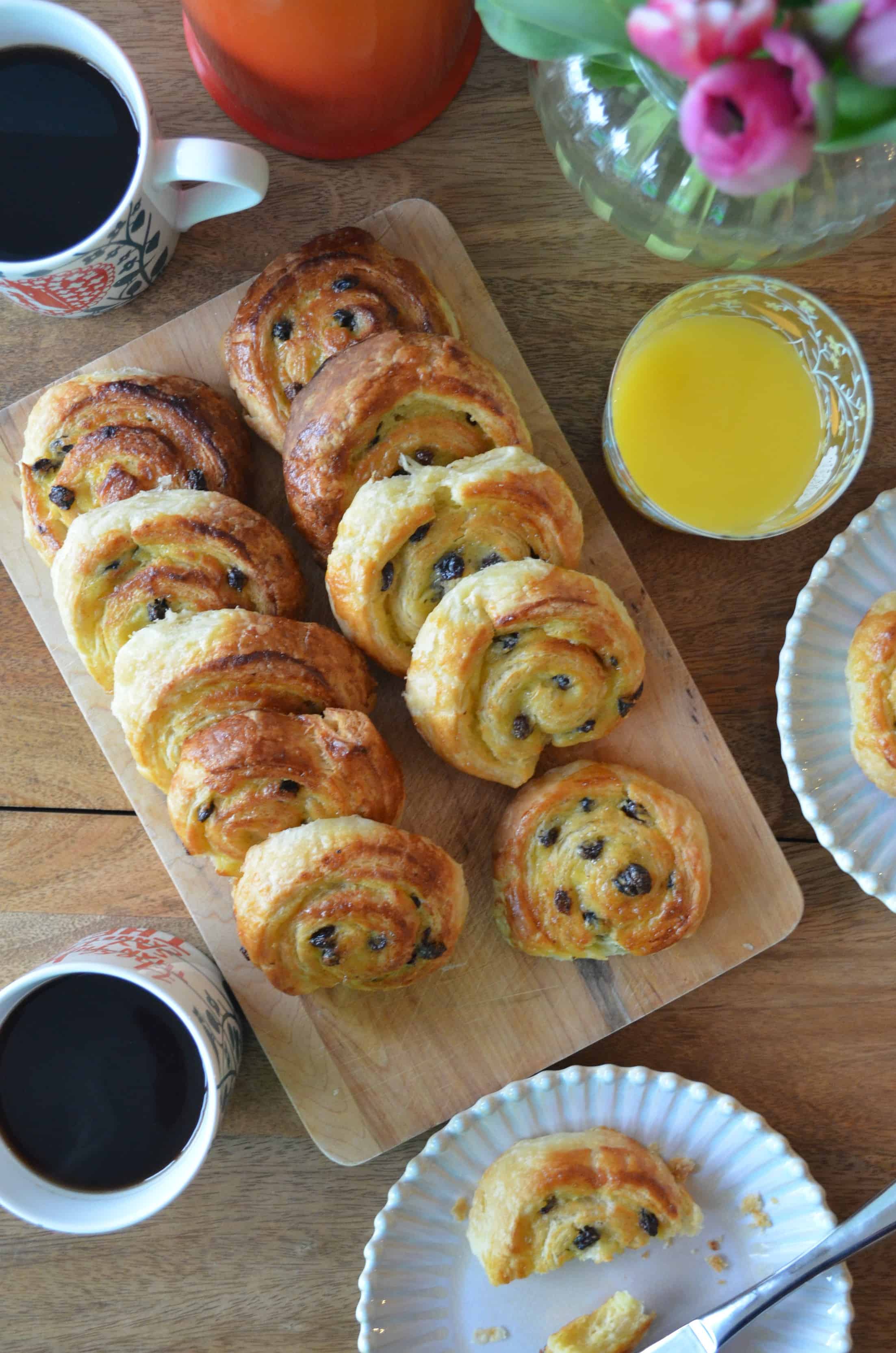 Pain Au Raisins are best eaten on the day of baking, but can be refreshed in the oven the next day for 10 minutes at 180C/160C Fan/Gas Mark 4. Recipe adapted from Edd Kimber's Patisserie Made Simple.
Keyword breakfast, pain au raisin, Pastry
Filed Under: Breakfast Bakes
Blueberry Bundt Cake