These raspberry & almond friands are super quick, deliciously light and only use a tiny amount of flour! Which in the quarantine world we live in, is like trying to find a needle in a haystack. I’ve made these for years, and they’re usually devoured on the same day of baking as they’re just SO GOOD. So moist, so light and with the perfect tangy raspberry kick against the sweet icing sugar. My mouth is watering just thinking about them. There isn’t any baking powder in these, which is another baking staple I’ve struggled to get hold of. I recently ran out, so I’ve had to order some online – which I’ve never done! I’m hoping it comes in appropriate packaging…otherwise I’ll be getting a mysterious small bag of white powder delivered….

The whipped egg whites are our raising agent here, and you’ll want to get them nice and foamy and then be EXTREMELY careful when adding them to the dry ingredients. Think of handling a newborn child…that’s the level of careful I want you to be at. If you can’t get hold of any raspberries, you could try these with blueberries or blackberries instead! Even cherries actually – which would give a major bakewell vibe! They’re a really versatile bake, and a great one to do with kids too.

If you don’t have a muffin tin, you could also spoon the mixture into cupcake cases to make little muffins. But if you do have a muffin tin, the extra golden buttery crust you get on the edges is really worth it. I create little strips of baking paper which I put into the muffin tin before adding the mixture – this really helps to get these little guys out once baked. 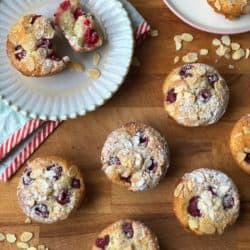